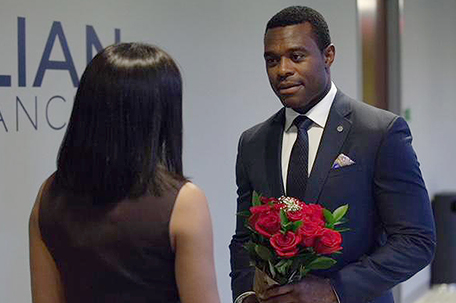 ABOVE PHOTO:  Lyriq Bent in a scene from “Acrimony”.

To say that relationships are challenging may be the understatement of the century.  Two people meet, talk, find common interests and then determine that their paths in life align. Throughout that journey, many fail to realize that the relationship will shift as the people grow. But when those people grow in different directions, when communication is lacking, when dreams are deferred… the relationship can become unharmonious, which often leads to acrimony. Acrimony is defined as “bitterness or ill feeling” and can cause people to go to extremes. Tyler Perry takes on a new genre directing the thriller “Acrimony” starring Taraji P. Henson and Lyriq Bent. Leading man Bent sat down with the SUN to speak about his experience shooting the film.

Bent has an undeniable presence when the camera is on him. Many may recognize him from his roles as Chekura Tiano in “The Book of Negroes” or as Jamie Overstreet in Spike Lee’s Netflix series “She’s Gotta Have It.” He has a charm, a wit, and a mystery… a certain je ne sais quoi that pairs particularly well with the character Robert he plays in “Acrimony.”  After 18 years of marriage, things go completely awry when Melinda (Taraji P. Henson) refuses to accept that the relationship is over. We’ve heard the expression “hell hath no fury like a woman scorned”, and we’ve seen stories of what can happen in situations of desperation when people snap. Although that trope is familiar, we’ve never seen this kind of story told in the form of a thriller by Tyler Perry. Bent spoke about how Tyler Perry is giving audiences something unexpected with this film.

“A big part of the intrigue with this movie comes from the trailers that people are seeing,” he said. “It’s like wow, Tyler stepped it up a notch and he really did in terms of presentation in storytelling. I’ll speak on behalf of Taraji for a moment. When she got the call, she was told it was her Glenn Close ‘Fatal Attraction’ moment. When I got the call, the pitch was… ‘this is Tyler Perry’s version of ‘Gone Girl’and that peaked my interest.”

“He tells the story from Melinda‘s point of view, so it’s her narrative,” Bent continued. “You go in not really knowing… you assume, but you don’t know who the protagonist is and who the antagonist is. You kind of side with Melinda because she’s telling you of her pain and if someone were to tell you a story like that you’re going to feel for them. But at some point you stop feeling for her because you’re getting another perspective. You’re seeing the other person’s point of view, which is my character, Robert. Now you’re not sure where your feelings lie, which is incredible when you’re telling a story because you have the audience involved on a different level.”

Not only is the film “Acrimony” a new wheelhouse for Tyler Perry, but also for Bent. He spoke candidly about venturing outside of his comfort zone and the non-traditional way they shot the film.

“We shot this film in eight days,” Bent said. “Taraji and I shot for five days, so what you see is five days of work. It was intense. It was shot so quickly because I’m shooting a TV show, Taraji is shooting ‘Empire’ and Tyler wanted to do it now. I got on set, Tyler brought waters to everybody, he sees me and goes ‘Hey Lyriq, how you doing? This is Taraji, Taraji, this is Lyriq… and action!’ So there wasn’t a lot of time, but there was great chemistry.

There was a sense of… I don’t want to say we were familiar with each other, it was more we respected each other. Between the three of us there was a lot of respect for each other’s individual talents and that’s the glue of our relationship.”

“The struggle is always can you execute… even if you have all the time in the world to do it,” Bent continued. “Then you take out the microscope and you zoom in on your abilities. This was a blessing in disguise because it didn’t allow me or any of the other actors to get into our heads and think. That’s an actor’s biggest obstacle… I think they get in their own way with ego. Acting is honesty, it’s truth and if you are a human being you can identify with those two things. Words are superficial feelings are genuine.”

There are pressures to deliver when the stakes are high, the material is intense, and the film schedule is short. Despite what many would consider extreme challenges, Bent conversely counts it all joy and shared his gratitude.

“Taraji is so incredibly professional and talented and so good at what she does and Tyler is a genius,” he said. “My job is to make sure I go in there and I lay out 100 percent. I think this was supposed to happen… I’m a big believer of that. I don’t think it’s something that you can engineer with any or everybody. If you are an insecure actor you cannot work with Tyler in a situation like this.” “If you’re shaky as an individual in a situation like this you can’t work with Tyler… you would have to be in a conventional setting.” Bent continued. “Working on this film just taught me a lot about myself and I’m glad that I had this experience, because now my abilities have no limit.”

Audiences can expect to truly go on a journey with Melinda and Robert throughout “Acrimony.” “This is a situation that relates to everybody, not just a culture, not just Black culture which Tyler Perry’s known for,” Bent said. “It’s great that he was able to do that for the last 10 years, so to do what he knows for 10 years was monumental, but then to say ‘let me do something different and show the industry that I can do more than what you know of me.’ I was just glad to be a part of that.”

We are sure to see a lot more from Lyriq Bent in the very near future. Follow his journey online @lyriqbent. At the end of the day, “Acrimony” is a story about love, and what can happen when someone loses their concept of forever. Who’s right? Who’s wrong? What really happened? That’s up to audiences to decide. “Acrimony” will be in theaters nationwide on Friday, March 30th. Check your local listings for show times.