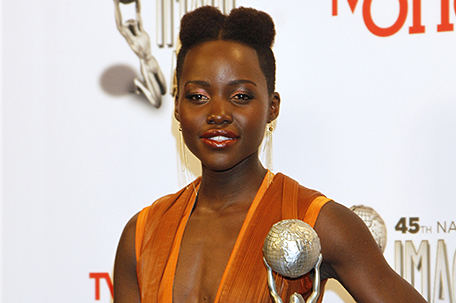 In a New York Times op-ed piece published Thursday, Nyong’o describes being invited to Weinstein’s home in Westport, Conn., shortly after meeting him in 2011. While screening a film with his family, the producer insisted Nyong’o leave the room.

“Harvey led me into a bedroom — his bedroom — and announced that he wanted to give me a massage. I thought he was joking at first. He was not,” Nyong’o wrote.

She convinced Weinstein to let her massage him to take control of the situation and “to know exactly where his hands were at all times.”

“I began to massage his back to buy myself time to figure out how to extricate myself from this undesirable situation,” Nyong’o wrote. “Before long he said he wanted to take off his pants. I told him not to do that.”

The actress escaped the situation and eventually began to establish what she viewed as a professional relationship “with boundaries” with Weinstein. That changed when the producer invited her for dinner at New York’s Tribeca Grill. Nyong’o found she was the only guest and Weinstein’s female assistant immediately disappeared.

Before the starters arrived, Weinstein said, “Let’s cut to the chase. I have a private room upstairs where we can have the rest of our meal,” Nyong’o wrote.

“I was stunned,” she continued. “He told me not to be so naïve. If I wanted to be an actress, then I had to be willing to do this sort of thing. He said he had dated Famous Actress X and Y and look where that had gotten them.”

Lupita Nyong’o won an Oscar for her role in ’12 Years A Slave.’

She left the restaurant and took off in a cab as Weinstein made a menacing comment about the damage she had done to her career by rejecting his advances. Nyong’o, who went on to an Oscar for 12 Years A Slave, said the experience was eye-opening.

“He was one of the first people I met in the industry, and he told me, ‘This is the way it is.’ And wherever I looked, everyone seemed to be bracing themselves and dealing with him, unchallenged,” she wrote. “I did not know that things could change.”

Weinstein has been fired from the film company he co-founded, The Weinstein Company, and kicked out of the film academy after revelations detailing decades of harassment and alleged abuse.