A lunchtime conversation with the cast of The Color Purple 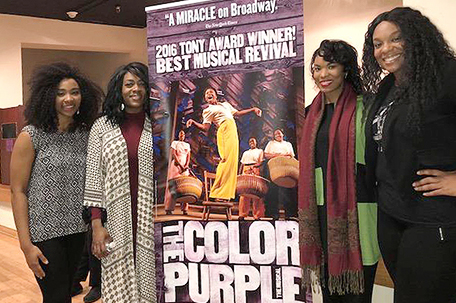 Last Thursday, The African American Museum of Philadelphia (AAMP) hosted a lunchtime conversation with three of the musical’s leading ladies… Adrianna Hicks (Celie), Carla R. Stewart (Shug Avery) and Carrie Compere (Sofia). In a conversation moderated by Dyana Williams, multimedia personality and host of Soulful Sunday on Radio One’s 100.3 WRNB-FM, Hicks, Stewart, and Compere opened up about their careers, the show, and the delicate art of balance.

The ladies began the discussion by sharing an ancedote about how they got started in the theater. Each shared an anecdote about how they started.  Soon after the conversations began, each actress spoke about the personal impact their characters continue to have on their lives.

Hicks reflected on playing the central character, Celie, and the way she manages to get through some very trying circumstances she found herself in. Through this character, she gets the chance to inspire others, she said.

“Celie is very authentic and very genuine,” Hicks said. “Everything that comes her way, she kind of just takes it with a grain of salt and she uses what she has. Celie believes that things are so much bigger than her, that’s how she’s able to be run over every single day.”

“Knowing that I’m telling someone’s story…. whether it’s dealing with insecurities (because we all deal with those) whether it’s hoping that something is going to turn out great, or whether it’s praying to God and hoping that He hears our prayers,” Hicks continued. “Every night, we see everyone change, from the 13-year-old girl in the front row to the upper-class middle-age White man in the back that’s crying. That’s what it’s about, creating a dialogue. Stepping in to Celie’s shoes has changed my life and I’m thankful for the experience.”

For Stewart, the character of Shug Avery has reminded her of how important it is to be in the moment.

“I will say this, when I was Olivia on Broadway in ‘The Color Purple,’ and not a character that had a lot of lines, it still was about embodying this person, being present and telling the story,” Stewart said. “That’s very important, because there is always a fresh new audience coming to receive something. Shug is very sassy, very brassy, very ‘say it how it is’… she doesn’t hold back. She has allowed me to have freedom in my sexuality, my womanhood, and everything. She’s allowed me to know that I am beautiful. I love it, I love playing her.”

Compere began with a laugh, sharing that Sophia is often misunderstood.

“Sophia gets a bad rep sometimes.” Compere said. “My particular take on Sophia is that she’s extremely vulnerable. She is someone who wants love and wants to be loved. Who she is, her strength, her boldness, and her willing to stand up for herself and other people… I’ve learned from that playing this character, I take that on everyday. I honor who she is not only on the stage, but who she is in the audience. We’ve had many Sophias come and watch the show, we’ve had many Celies and many Shugs. Her testimony led to people getting out of abusive relationships as a result of watching what we did. So for me that’s what helps me to carry Sophia with me.”

Hicks, Stewart, and Compere spoke candidly about the challenges of rigorous schedules, travel days, not seeing their families as often as they would like, and the excitement and challenges that comes with performing on new stages every week.

Williams then opened up the dialogue to the audience, offering them an opportunity to ask questions. In a particularly touching moment, an aspiring actress began crying as she talked about struggling to not give up. The ladies offered stories about their own dark periods, obstacles they had to overcome, and encouraged the young lady to never give up.

After the discussion ended, Hicks, Stewart, and Compere displayed an incredible amount of kindness, joining the audience for pictures, hugs and additional conversation.

If you have not seen these incredible women perform in this run of “The Color Purple,” you’re truly doing yourself a disservice! “The Color Purple” North American tour has engagements now through August 2018. Visit www.colorpurple.com for more details.