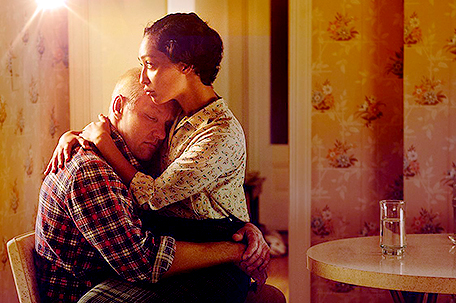 The troubled history of race relations in America is a stain on the fabric of America and all that it claims to represent.

Years of abuse, segregation and inequality for Black people in this country eventually led to fights for a good education, the right to vote, and the right to peacefully coexist without fear of impending doom.

Among the constitutional rights stripped away from many Americans, was the right to love and marry without regard to race. In the 1967 Supreme Court ruling Loving v Virginia, miscegenation (or interracial relationship) laws were declared unconstitutional. The “Loving” in Loving vs Virginia, was a couple from Virginia, Mildred and Richard Loving, who were arrested for falling in love, marrying, and having a family during the time when these laws were the law of the land.

In the new movie Loving, acclaimed director Jeff Nichols brings the story of Richard (Joel Edgerton) and Mildred Loving (Ruth Negga) to the big screen. Actors Christopher Mann and Will Dalton co-star in the film and were enthusiastic to share the experience of working on this iconic story.

Mann, a Chester native, plays the role of Mildred’s father Theoliver Jeter. Armed with the knowledge he had gained from watching the HBO documentary that told the Loving’s story, Mann commended the team behind the film for the way they brought this period piece to life.

“After reading the script, meeting the director, and getting on location, I could see how careful they were being about making sure they were as accurate as they could be telling this true story,” he said. “They brought the real heart of who the Lovings were without trying to put any fluff on it. They concentrated on the love affair and the importance of what it did in regards to changing miscegenation laws across the country. It’s a phenomenal piece and I’m completely honored to be apart of this project.”

There are moments throughout Loving that are emotionally strenuous. Watching Mann’s character struggle with the fact that he is unable to protect his daughter from the laws that aim to end her marriage at all costs is heart wrenching.

It was very real for Mann, he said.

“I actually have three daughters of my own, and one son,” he said. “I had already met Ruth who is a very sweet person. She could actually be one of my daughters, she’s just a tad bit older… so it wasn’t a far stretch to put myself in that position in regards to how I would feel with my daughter in a position like that. Because of the time and place, Theoliver knew it would be detrimental for him to do too much, because then his wife and his daughters wouldn’t have him, either. It’s a tough place to be, having your hands tied behind your back.”

Dalton, who plays Virgil, describes his character as “a free spirit who says and does whatever is on his mind at the time. Virgil is a lot of things at once.  A walking contradiction of sorts…. but one thing that Virgil will always do is tell the truth or his version of it.  I sort of embodied a lot of my dad’s friends that I remember from my childhood and rolled them into one guy.”

When you consider the current racial and political climate, the story of the Lovings has a lot of resonance, Dalton said.

“This film is so relevant to what’s going on today,” he said.  “I’m honored to be a part of a film with such importance.  To think that just shy of 50 plus years ago, this couple almost had their family and lives torn apart due to racism.  With all of the police brutality and killings of unarmed black men in this country, gay men, women continuously having to fight for their rights as human beings and the growing tension between so many groups, this movie is a great way of reminding people that no matter the color, religion, creed or sexual preference; the one thing that conquers all is love.”

“It’s so fitting that this couples last name is actually LOVING,” Dalton continued. “You couldn’t script that any better.  It’s as if it was divine intervention.  Only love can drive out the darkness of the world! Make no mistake about it, even though this has all the makings of a civil rights movie, this is one of, if not the greatest, love story that you’ll read about or see on film.”

What was perhaps the most disheartening aspect of seeing this film is that African Americans are still facing a number of these obstacles in our quest to attain peace and equality.

Mann and Dalton said that it might be time for American to really pay attention to the country, and do the work that’s still vitally needed to bring us all together.

“First and foremost, because of the upcoming election, we have to vote for people we know are progressive in the matter of race relations. This story alone humanizes African Americans so to speak. We are looking at a situation where if Black lives did matter we wouldn’t even have the story because they would have been just another happily married couple. We have to let go of those old ideas that were used in the formation of this country… we have to get rid of that old way of thinking.”

The movie Loving opens in theaters nationwide on Friday, November 4th. In my opinion, this film is a must see!