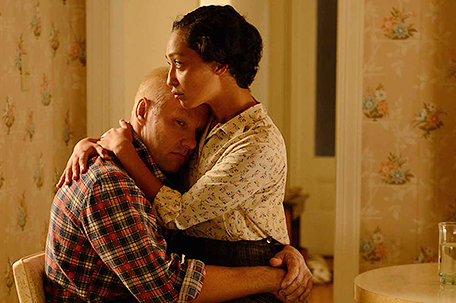 Focus Features has set a November 4  release date for Loving, the film directed by Jeff Nichols, which follows the real-life story of Richard and Mildred Loving, an interracial couple living in the state of Virginia in the 1960s, where interracial coupling was illegal.

The film made its world premiere at the Cannes Film Festival in May, and early reviews have been mostly strong, so I think Focus likely has an awards contender on their hands, which shouldn’t be a surprise at all. The subject matter (based on a real-life landmark event), as well as the talent involved, made it an inevitable contender. The buzz around the film should carry through until its November theatrical, especially if Focus slots it at upcoming prestige fests like Venice, Telluride, Toronto and New York (NYFF).

— “Making a nice two-cushion shot where most filmmakers would slam hard straight for the pocket, writer-director Jeff Nichols takes an appealingly low-key approach to an important American civil rights story in Loving.” (The Hollywood Reporter)

The film follows the Loving couple’s struggles, including the US Supreme Court case named after them – Loving vs Virginia (1967); the landmark civil rights case in which the United States Supreme Court, in a unanimous decision, declared Virginia’s anti-miscegenation statute unconstitutional, overturning existing laws and bringing an official end to all race-based restrictions on marriage in the United States.

Joel Edgerton and Ruth Negga star as Richard and Mildred Loving, whose interracial marriage in the 1950s led to banishment, prison, and finally Supreme Court vindication.

Persecuted by a local sheriff, the Lovings were found guilty of violating Virginia’s law against interracial marriage and forced to leave the state. But Mildred Loving chose to fight. She wrote a letter to Attorney General Robert F. Kennedy asking for help. He referred her to the ACLU and two young attorneys took the case.

In 1958, they went to Washington, D.C. – where interracial marriage was legal – to get married. But when they returned home, they were arrested, jailed and banished from the state for 25 years for violating the state’s so-called Racial Integrity Act. To avoid jail, the Lovings agreed to leave Virginia and relocate to Washington. For five years, they lived in Washington, where Richard worked as a bricklayer. The couple had three children. Yet they longed to return home to their family and friends in Vitginia. That’s when the couple contacted Bernard Cohen, a young attorney who was volunteering at the ACLU. They requested that Cohen ask the Caroline County judge to reconsider his decision.

Cohen and another lawyer challenged the Lovings’ conviction, but the original judge in the case upheld his decision.

This Judge Leon Bazile quote is heard at the beginning of the film: “Almighty God created the races white, black, yellow, Malay and red, and he placed them on separate continents…. The fact that he separated the races shows that he did not intend for the races to mix.”

The couple became celebrities after the landmark ruling. But Mildred and Richard wanted nothing to do with fame. They returned to their tiny Central Point, Virginia community, and shunned publicity. Richard died of injuries sustained in a car accident in 1975. Mildred, who died in 2008, was quiet and self-effacing and maintained all along that they married because they were in love, not to fight a civil rights battle.

Joining Negga and Edgerton in the cast are Alano Miller (who many of you now know as Cato from WGN’s hit series, “Underground”), Terri Abney, Nick Kroll, Jon Bass, Marton Csokas, Bill Camp, Michael Shannon, the LIFE Magazine photographer who shot the now-iconic images of the Lovings in 1965.

“I was struck by the simplicity of the Loving’s story, and I hope to make this a painfully beautiful film,” director Nichols said before production began on the film last year.

Loving is produced by Big Beach and UK-based Raindog Films (actor Colin Firth’s production company), with the former financing it as well.

The film is inspired by director Nancy Buirski’s 2011 feature documentary on the couple, The Loving Story (see the ad for the film above).