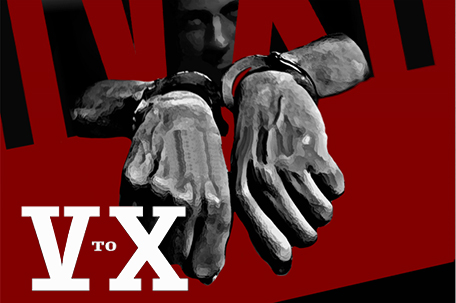 In the play “V to X”, viewers are treated to a slice of life in a private correctional facility. It’s not for the faint of heart.

According to statistics, there are 1.5 million Black men currently locked away in America’s prisons.

That means that there are 1.5 million families that are missing a loved one.

A few months ago, the Vice news crew aired a documentary on it’s HBO show called “Fixing The System”.

The documentary, which garnered attention for including President Barack Obama’s visit to a federal prison, looked at mass incarceration, the long prison sentences for non-violent drug offenses that has led to much of it, the fact that people are making money off of this in the form of private prisons, and the people impacted by this.

But that documentary, while a thorough look at what got us here, didn’t take you into the day-to-day reality that prisoners face.

The play, “V to X”, looks at that day-to-day in a way that’s so in the face of it’s audience that the audience is, literally, a part of the production.

Set in privately owned Gentry Correctional, the play looks at the lives of a group of prisoners as they deal with the realities of their situation.

Written and directed by local playwright Kash Goins and part of a 10 play arc that began with “VI Degrees” a play about HIV/AIDS in the Black community, this story of life among this cell block of men includes depictions of the brutalities of prison including physical and sexual abuse and the psychic abuse that is solitary confinement.

It was the aftermath of the case of Kalief Browder, a case that centered on solitary confinement, that helped Goins come up with a way to tell this story.

“He spent three years in solitary on suspicion of stealing a backpack,” Goins said. “He was 16 and had spent almost 900 days in jail. When he got out, he tried to get his life together. His mother came home and found him; he hung himself out of the bedroom window.”

There are a lot of twists and turns in a well-written script that features a troupe of great local actors.

But if you’re one of those people who is “fashionably late” to things, you might want to avoid that impulse when it comes to “V to X”. You see, the audience is, literally, part of the set. While the play isn’t necessarily interactive, the audience itself is placed in the cell block, behind bars, up close and personal.

“V to X” is playing at the Skybox At The Adrienne, 2030 Sansom St., in South Philadelphia until Feb. 20. Tickets are $25 and can be purchased here.