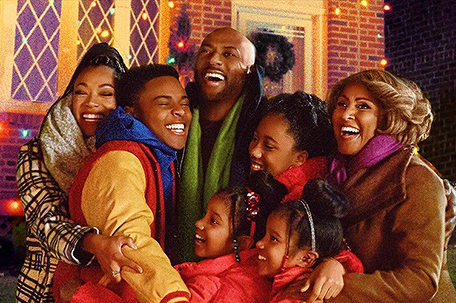 When it comes to talent, Deysha Nelson has it all. Born in Georgia, then raised in Elkins Park before a recent move to Pennsburg, Pennsylvania, Deysha considers Philadelphia home. Nelson’s love for entertainment began at a young age and with the support of her mother, and twin sister Deyahna, she continues to soar.

At just 12 years old, Deysha is already an established actress, producer, model and correspondent. She landed the role of Hannah on CBS’ “God Friended Me,” hosted the “Hollywood Christmas Parade” for The CW Network, and she is quite the accomplished voice actress, bringing characters like Kangaruthie in Nickelodean’s “Tot Cop” and Gina Giant on the Nick Jr. Show “Wallykazam” to life.

Deysha is currently making waves in her newest role as Mya in Netflix’s “Holiday Rush” starring Romany Malco, Sonequa Martin-Green, Lala Anthony and Darlene Love. Nelson sat down with The SUN to discuss her passion for acting, her career thus far and what she’s looking forward to doing next.

Deysha Nelson knew exactly what she wanted to do very early in life. Armed with natural ability and gusto, she was determined to do it.

“I first started acting when I was five years old, but the first thing that I actually started with was modeling,” she explained. “When I would come home from school, I would perform plays that I wrote in front of my mom and family. I told my mom I really want to act… this is what I really want to do.”

Deysha shared her gratitude for the support she continues to receive from her family, friends and the Philadelphia community as a whole.

“It makes me so thankful that I have people around me,” she said. “A lot of people don’t have family, so I feel lucky to have my family, friends and fans that support me in everything I do.”

“Holiday Rush was really fun to work on because of all the great actors, producers and directors… everyone was just so amazing,” she emphasized. “I learned a lot from more experienced actors like Romany Malco, Sonequa Martin-Green and Ms. Darlene Love. It was a lot of fun working alongside such amazing people.”

Deysha is learning the beauty of playing a wide array of characters on the big screen. She shared her appreciation for playing a character that is the polar opposite of her in real life.

“Maya was a very sassy character. She was all about her social media. She wanted to be very popular. She wanted to get her insta-worthy moment and didn’t care what she had to do to get it,” Deysha said. “When I’m with my sister or brother and when I’m around other people, I’m never sassy because I feel like it’s disrespectful… but it was fun to pretend to be sassy.”

In addition to having a plethora of talent and an incredible work ethic, Deysha is grounded and possesses a wisdom that far exceeds her age. She offered her advice to aspiring actors.

“My advice to everybody is to never give up! If this is really what your passion is and what you want to do, push towards it and don’t take no for an answer,” she said.

Deysha is looking forward to continuing her journey as an actress and branching out into other aspects of the industry. She is also embarking on the path of directing as the assistant director of “Bully Me Bad,” a bullying prevention film Deysha is working on with her sister that is set to be released sometime in 2020.

You can keep up with all of Deysha Nelson’s upcoming projects by visiting her website at: www.deyshanel.com. Be sure to follow her at: @deyshanel on Instagram and Twitter. “Holiday Rush” is currently streaming on Netflix. Tune in with family and friends for the perfect addition to your holiday season!