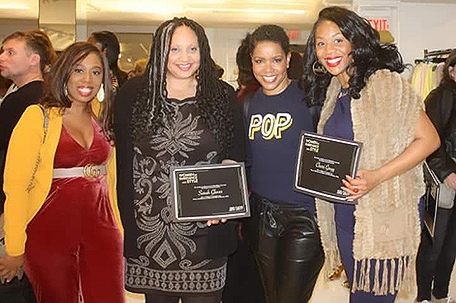 Local retailer, Joan Shepp, hosted its annual “Women of Style and Substance” event in honor of Black History Month on February 19. Celebrating its 20th year, the event honored 40 African American women who contribute to the growth and betterment of the community.

Tuesday Gordon Gaines and Joan Shepp, created the “Women of Style and Substance” reception and fashion affair in  2000. Together they’ve honored over 400 African-American women throughout the Philadelphia region.

The 2020 honorees ranged from TV and radio personalities to health professionals and civil leaders.

Their photographs are displayed in the Joan Shepp store window on Chestnut Street, and will remain on display until the end of the month.

The proclamation recognized the two for their continued commitment to honor African American women, as well as their dedication to raising money and awareness to different organizations over the last 20 years.

Following the proclamation presentation,  the guests of honor were presented with certificates by broadcast journalist and the evening’s emcee, Monique Braxton.

Each woman of substance and style was given the chance to introduce themselves with a short 30 second speech.

Singer, Melba Moore surprised everyone with a beautiful performance. Other performances included songs by singer, Yaya Lora, and tunes by DJ, DJJ2J.

In addition to the tradition of  honoring African-American women in the community, money is donated to a different charity organization each year. A percentage of the day’s sales benefited Stoney’s Girls, a fund created to support the children of the late Erwena Rebecca Stoney.

Stoney, a lifelong friend of Gordan Gaines’ was an influential member of the Philadelphia African American community also. She  lost her battle with breast cancer and left behind her three young grandchildren whom she took in and raised since birth.

The Stoney’s Girls fund was set up to help make certain that young ladies will have opportunities to achieve great things in life.

During Gordon Gaines’ touching remembrance of her good friend, she instructed Stoney’s grandchildren to look at everyone one in the room. She went on to say that the room is full of remarkable and extraordinary leaders, and that we are now a part of their village.