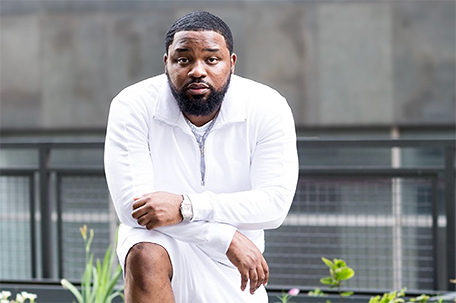 Philadelphia rapper Louie V Gutta began his music journey in 2012, initially as a writer before branching off as a solo rap artist.

Known for his fusion style of rapping and singing, Louie V Gutta has worked with notable acts such as Philadelphia’s own Meek Mill, Rick Ross, Wale, French Montana and Yo Gotti. With the industry and momentum on his side, Louie V Gutta is making waves with his latest single, “Black Man in Amerikka”, an ode to the Black experience in this nation. While it can be difficult to stand out in the music industry, Louie V Gutta spoke to The Philadelphia Sunday SUN about what sets him apart, and the inspiration behind his music.

“I love making music, so I just wanted to make music,” he said. “Naturally, the style of music I made was more melodic, but I could also do the rap that Philly is known for. It wasn’t as popular to do the kind of music that I do (moreso like a Drake sing rap) at that time. I’ve been doing that since then.  It’s more popular now (than it was then), but I can go in both lanes.  Most people can’t do both.”

After working with a wide array of mainstream music acts, Gutta learned the ins and outs of the business and was motivated to keep pushing forward in the process.

“It was an immediate learning experience for me,” he said. “I worked with Meek early on, before his first album. I’ve been in the background, around those kind of artists for years, taking it all in and seeing the recording process. Someone like Rick Ross… I’m looking at him like you have millions, but you don’t sleep, you stay in the studio, you live there. So it’s like, don’t get comfortable with what you have. Seeing these guys’ work ethic pushed me to go harder. I learned and applied what other artists were doing and now I know what it takes to go where I want to go.”

Gutta put a great deal of effort into staying faithful to his sound, while simultaneously embracing the ebbs and flows of the industry.

“You just have to stay true to what you believe in,” he said.  “I don’t want to switch my sound according to the new trend or what’s in now. You have to stick with what you know, but also be open to learn, keep learning, keep pushing yourself and trying different things.”

Throughout his career,  Gutta’s music has always been a reflection of real life. Inspired by the current protests and civil unrest, he found the inspiration to write “Black Man in Amerikkka” immediately after the death of George Floyd. Throughout the video, he uses powerful imagery that juxtaposes protests of the past with the present day protests happening globally. The visuals — paired with the lyrics — drive home the fact that the brutalization of Black and Brown people at the hands of police continues to be standard practice. With over 60,000 views on YouTube, people are taking notice of the message.

“All the injustice going on is not new… we’ve been dealing with this for years,” Gutta said. “There’s George Floyd and Breonna Taylor and still no arrests have been made; to me that just seemed like the last straw. Here in America, people are starting to wake up and starting to see. I make music about what’s going on in my life and what I see. Their deaths are something that I felt. I wouldn’t feel right with myself, in my field, making music and not saying anything. I wanted to speak on it — not for clout, not for numbers just because that was how I was actually feeling. Action is important to me. A lot of people talk and don’t do anything… I wanted to do something.”

Gutta has new music and visuals coming soon. His upcoming album — “King of The North” — is scheduled to be released at the top of next year. In the interim, he’s planning on releasing an EP featuring “Black Man in Amerikkka” at the end of August.

“Black Man in Amerikkka” is currently available on all platforms. To stay updated and hear more music, visit his website at: www.louievgutta.com and be sure to follow him on social media at: @LouieVGutta.