Local artists, performers and entrepreneurs shine brightly at ‘The Colour of Culture: A Celebration of the African Diaspora’ event 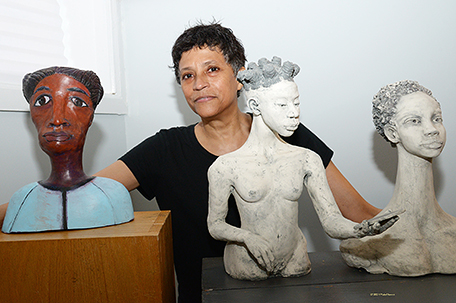 ABOVE PHOTO: Artist Gail Lloyd of Germantown, displays a trilogy of African busts at The Colour of Culture Art Show on Saturday. (Photos: H. Michael Hammie)

The festivities were part of a multicultural mission to showcase the arts, culture, music, education and small business while celebrating the importance of investing in the local cultural economy. The event also opened up the building as a space for the community.

The goal of the event was to bring African American, African and Caribbean communities together in Philadelphia through diversity and grassroots community engagement.

Jamaican native Salmon, known as Ikuru, with his wide smile and bubbly face, was the first person you saw when you entered the first floor of the building. His expressive eyes lit up like a pinball machine when he talked to curious onlookers about his artwork including two framed pieces entitled “Life.” He stood in front of the image of a women carved from pine. The piece was framed on a red background next to a companion piece of a man whittled in a mahogany-frame on a yellow background.

He currently has an exhibit, entitled “Moon at Night,” at the Parkway Central Branch of the Free Library of Philadelphia, located at 1901 Vine Street . He describes his art as “authentic, relaxing … and just nice.”

Gail Lloyd of Germantown also had her artwork on display. Before becoming a professional sculptor three years ago, she worked in the independent film industry.

“I always loved working with clay,” she said. “I just didn’t envision it in my future [as a career].”

Lloyd, originally from Washington, said working with clay is very organic compared to film, which has become more digital and less tangible.  She believes ultimately there is life to her art, producing sort of “a spirit in the clay that comes alive after the clay hardens.”

Lloyd added that her artwork is “memory-inspired,” and that she doesn’t use models. Besides doing pottery, Lloyd enjoys painting with acrylics. If you missed her artwork, don’t worry. She currently has a piece on exhibit at The Colored Girls Museum in Germantown.

Nearby, Masie Blu, a singer and entrepreneur from Roots Generate, was showcasing a different kind of art. She was promoting authentic homemade jewelry and fashion accessories made by tribes in Kenya, Ghana and other places a continent away.

Upstairs in the two-story building, Jeff Brown, the founder, president and CEO of Brown’s Superstore, LLC, co-sponsored the event. He has supported many causes in underserved communities. The two-day celebration featured live performances by singers, musicians and spoken-word artists presented by Milena of Sol Fed Open Mic and the all-female band Black Canvas and the Sounds of Diaspora with DJ Reezey showcasing cultural indigenous Afro and Caribbean music. Brown even took behind the controls of the turntables to learn a few riffs with DJ Reezey.

The event also featured a panel discussion on Black Arts and Liberation that included Tiffany Bacon, an actor, radio personality and fashion designer; Arabia Richardson, a self-proclaimed “dancivist,” Terrence L. Gore, a multimedia artist, and several others. Gore is an inspiration and shared his journey of living with a rare progressive multifocal leukoencephalopathy (PML), caused by HIV. The expression of his artistry is part of his healing therapy.

Zane Booker of West Philadelphia participated in the panel discussion. Before injuring his ankle, he performed nationally and internationally with several dance companies such as The White Oak Dance Project, Fosse International Tour and The Philadelphia Dance Company.

Booker, who was the deli manager at the ShopRite on Island Avenue at one point, said he took the job to start rebuilding himself. Thanks to Brown and his unique business incubation program, which partners with local entrepreneurs providing retail space to sell their products, Booker will open “Brown Street Café” inside the supermarket in the fall.

“We closed the hoagie bar in our store, and in the back of my mind, I thought it would make a beautiful coffee bar,” Booker said. “So when ShopRite’s business incubation program presented itself, I made a pitch.”

Booker added the store is named after the street where he was born.

Booker’s boss Brown, who owns 10 ShopRites and two Fresh Grocer stores in the Philadelphia region, said he champions community endeavors like The Colour of Culture event and entrepreneurial programs that give back to neighborhoods.

“It’s all about the community, connections and relationships, building each other up and being curious about culture, religion, art, customs and anthropology, and looking at that in a positive way to learn about other people’s culture,” Brown said. “Once we know and trust each other and have a love for each other’s cultures, we can make magical things happen.”