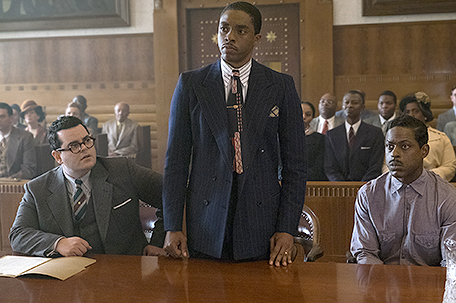 Director/producer Reginald Hudlin chose to tell the story of a man many of us grew up hearing about, but from a new angle in new film “Marshall,” the semi-biopic tale of trailblazing Supreme Court justice Thurgood Marshall. We know these truths about Marshall’s work — winning the historic Brown v. Board of Education suit, becoming the first African-American appointed to the U.S. Supreme Court — but what about before he had a name and historical cases to lean on? How did he become a pivotal figure to be celebrated every February?

“Marshall” explores the humble beginnings of the young lawyer. Portrayed by Chadwick Boseman (who does biopics well, see “42”) is a man who speaks his mind, rubs people the wrong way, and has the facts and evidence to back up his cocky disposition. Set in the 1940s, working to get innocent Blacks their freedom in the courtroom, and as an attorney for the NAACP, Marshall finds himself in Bridgeport, Connecticut attempting to prove the innocence of Joseph Spell, who was accused of raping his employer, aristocrat Eleanor Sturbing (Kate Hudson, “Mother’s Day”), multiple times, tying her up, and throwing her over a bridge. He is the perfect lawyer for the case, except because of state law and a mix of discrimination, Marshall cannot take the lead on the case, cross-examine witnesses, or even speak in court. With this major obstacle, he must rely on civil lawyer Sam Friedman (Josh Gad, “Frozen”) to take the lead, learn about criminal defense, and help him prove Spell’s innocence.

Discrimination is a constant theme throughout the story. Because Marshall was Black and Friedman Jewish, they both caught their share of hell throughout the process which helps to unite them. They are an odd couple, they practice different concentrations of law. They argue more than they agree, but they are forced to work together to prove Spell’s innocence.

This is the first time Hudlin has directed a film in 15 years, as his genre of choice is usually comedy. The story was put together quickly with screenwriting credits to veteran civil rights lawyer and first-time writer Michael Koskoff and his son Jacob. The story is both emotional and empowering. Audiences will appreciate the high energy, budding relationship between Marshall and Friedman..

Viewing Boseman in the role of Marshall was hard to believe because he bears little physical resemblance to the late Supreme Court justice, but the actor made sure to make up for that in his performance. He is outstanding in any role he touches, and “Marshall” is no different. He played the young Baltimore lawyer expertly, and sidekick Gad was just as convincing. As Friedman, Gad is a little more angry and ornery at the start of the film, but the more he humbles himself and learns from Marshall, the better he becomes, ultimately switching to defend civil rights cases.

There is a guest appearance at the end of the film that is just as moving as any, and the historical references are marvelous. It would be interesting to see more biopics delve into little- known facts about their subjects. It would prove to flesh out the story more thoroughly.