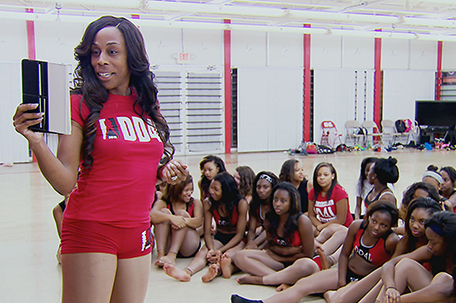 ABOVE PHOTO:  Scene from Lifetime’s “Bring It!”

After two consecutive years of bringing down the house, “Bring It! Live” is back by overwhelming demand, and set to take the stage in Philadelphia. Miss D and her Dancing Dolls, the stars of Lifetime’s hit series “Bring It!” will be coming to the Merriam Theatre at the Kimmel Center for two performances on Saturday, July 14 at 3:00 PM and 8:00 PM with an all new “Bring It! Live” 2018 summer tour.

Tickets go on sale Friday, March 2 at 10:00 AM and can be purchased at www.kimmelcenter.org, by phone at 215-893-1999, or at The Kimmel Center Box Office. Tickets start at $37.75 (plus applicable service charges) with pricing subject to change. VIP packages are available at all price levels and include a souvenir tour program and photo opportunity. The deluxe option includes premium seating. Add-on VIP packages can only be purchased if accompanied by a valid ticket to the live performance. Limited supplies are available.

In 2016, the elite world of hip-hop majorette competition was brought to the main stage for the first time with an incomparable energy that took the country by storm. Audiences across the nation were enamored by the fierce, original, high-octane performances that inspired fans of all ages and left them clamoring for more.  With hotter-than-ever, never-before-seen performances on deck for the 2018 tour, there has never been a better time for “Bring It!” fans.

New episodes of “Bring It!” can be seen on Lifetime Fridays at 9/8c or anytime on mylifetime.com.

“Bring It! Live” is produced for Lifetime by Mills Entertainment, the leading producer and promoter of branded live entertainment.

Angela Dunlap’s hit stage play “Why Do Good Girls Like Bad Boyz?” this fall at the Merriam Theatre