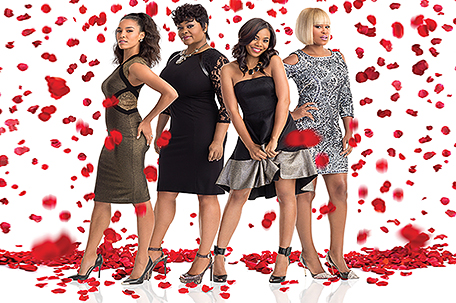 Regina Hall, Jill Scott, and Eve Jeffers Cooper star as three single friends who vow to get married within a year after attending their best friend’s wedding, in the Lifetime Original Movie With This Ring, which premieres on Saturday, January 24, 2015, at 8pm ET/PT.

The romantic comedy is based on the best seller, “The Vow,” by Denene Millner, Angela Burt-Murray and Mitzi Miller, which tells the story of  Trista (Hall), a career-driven talent agent, Viviane (Scott), a successful gossip columnist, and Amaya (Cooper), a struggling actress, who make a pact to get married within the year to either a new love or a man waiting in the wings, after attending their friend Elise’s (Sudano) wedding to Nate (Bishop) on New Year’s Eve. But the close friends face their own set of challenges – Trista has not gotten over her commitment-phobic ex-boyfriend Damon (White), Viviane is secretly in love with Sean (George), the father of her son, and Amaya is desperate to break up her boyfriend Keith’s (Sanders) unhappy marriage so they can live happily ever after. But will they all make it to the altar?

Written and directed by Nzingha Stewart, “With This Ring” is produced by Sony Pictures Television.

Casting is by Tracy “Twinkie” Byrd.

A first trailer for the film has surfaced and you can view it on: http://blogs.indiewire.com/shadowandact/watch-first-trailer-for-romcom-with-this-ring-regina-hall-jill-scott-eve-star-coming-january-2015-20141222.

The new superhero drama ‘The Cape’ premieres on NBC, Jan. 2011