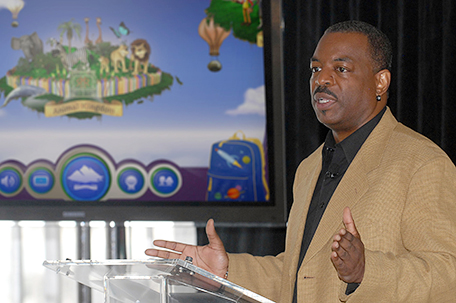 ABOVE PHOTO:  Actor LeVar Burton introduces the all new Reading Rainbow adventure app to the media in 2012, to publishers and parents at the “Reading Rainbow Relaunch” event in New York. Burton’s campaign to bring “Reading Rainbow” to the online masses is off to an impressive start. It reached its fundraising goal within hours of its launch on Wednesday, May 28, 2014, on Kickstarter, according to the fundraising website.  (AP Photo/Reading Rainbow, file)

The goal of raising $1 million by July 2 was reached within hours of the campaign’s launch Wednesday on Kickstarter, according to the website. More than 23,000 donors had pledged $1.1 million and counting.

Burton was the host of “Reading Rainbow,” the children’s literacy program that aired on public TV through 2009.

“It was my mother who taught me that, by picking up a book, I could ‘go anywhere’ and ‘be anything,’ “ Burton said in a posting on Kickstarter.

Contributors can claim rewards ranging from autographed memorabilia to a private dinner with Burton to a chance to put on the visor that the actor wore on “Star Trek: The Next Generation.”

“We’re not just getting pledges, but so much email love that our server froze,” said Mark Wolfe, Burton’s business partner. “I’m so happy to help. LeVar taught me to read,” is among the typical messages, he said.

A tablet version of “Reading Rainbow” was released in 2012 and became a top-selling education app. It provides access to hundreds of books and Burton’s videotaped “field trips” to historic and other places, said Wolfe, who co-founded the for-profit RRKidz company with Burton.

The Kickstarter campaign is intended to help bring an online version to more children for a $5 monthly subscription fee, Wolfe said. Many more families have access to computers than tablets, he said.

An educator-specific format will be created for schools and made available free to at least 1,500 of the neediest classrooms, RRKidz said.

Burton and Wolfe hold the global rights to “Reading Rainbow” in partnership with the show’s creator, public TV station WNED in Buffalo, New York, according to a release.