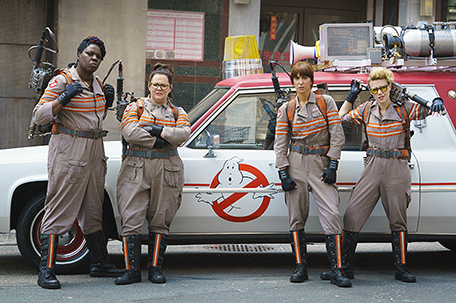 Comedienne Leslie Jones was hired as a writer by Saturday Night Live in 2014 and quickly gained popularity after a memorable on-air appearance during the show’s “Weekend Update” segment. So, she was subsequently officially invited to join SNL’s ensemble cast during the show’s 40th season.

Currently, Jones can be seen on TV in an Allstate Insurance commercial that’s in heavy rotation.

Kate McKinnon is also an SNL cast member and has been nominated for three Primetime Emmy Awards for her work on the show. Since coming aboard in April 2012, she has entertained viewers with her critically-acclaimed impersonations of Hillary Clinton, Justin Bieber and Ellen DeGeneres.

McKinnon was recently seen in Sisters opposite Tina Fey and Amy Poehler, and as the voices of Wife Fish in Finding Dory and of Stella in The Angry Birds Movie. In December, she’ll co-star opposite Jason Bateman and Jennifer Aniston in Office Christmas Party.

Kam Williams: Hi Leslie, hi Kate. Thanks for the interview.

Kate McKinnon: [Shouts] Kam! how are you?

KW: I’m doing great, and I absolutely loved this film.

KW: I liked how the movie paid homage to the original and brought back a lot of its cast members while breaking new ground in its own hilarious fashion.

KM: I think that’s what we were trying to do. We’re both huge fans of the original, but it was just too good to just leave it buried, so [director] Paul Feig wanted to put a fresh take on it, and I think we managed to achieve that.

KW: You certainly did. I love Paul’s work. In fact, his movie Bridesmaids, was my pick as the #1 film of the year on my Top 100 List for 2011, a rarity for a comedy. And this film ranks right up there with Bridesmaids.

KM: Wow! Thank you. That means a lot, because Bridesmaids is one of my all-time favorites. I think that Paul started something of a mini-revolution when he made that film. And this movie is a continuation of that.

KW: What’s it like to be in good hands?

KW: Kate, I like your Mastercard “Less Typing, More Dancing” commercial, too. May I dip you?

KM: Well, I’ve been dipped so many times that I have vertigo from all the dipping.

KW: In September, we’re going to see both of you in the movie Masterminds. How did you enjoy making that film?

KM: That was a while ago but, man, did we have fun.

KM: Leslie and I went out and ate our weight in chocolates one night.

LJ: There was also a place there that had great shrimp and grits. Oh, it was so good!

KM: And Jared Hess, the director, we love. He’s such a funny guy.

KW: Back to Ghostbusters. What was the most challenging part of shooting this film?

KM: Was it the stunts?

LJ: Yeah, I would say all the physical stuff. That was challenging, because I think Paul forgot we were comediennes. 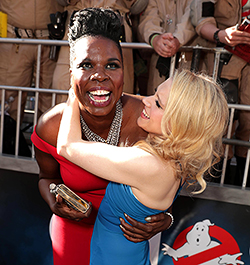 Leslie Jones and Kate McKinnon are seen at the Los Angeles Premiere of Columbia Pictures’ “Ghostbusters” at TCL Chinese Theatre on Saturday, July 9, 2016, in Los Angeles. (Photo by Eric Charbonneau/Invision for Sony/AP Images)

KM: No, he remembered. He just forgot to tell us about the stunts. [Both laugh]

KW: Kate, what is your favorite impersonation to do?

KW: How was it different for the two of you to be making a movie together as opposed to doing “Saturday Night Live?”

KM: What was it like? Well, thank God for Leslie, since we knew each other really well. Being in a movie this big was was sort of a new experience for both of us. We would turn to each other frequently and go, “Where are we? What’s happening? Are we messing this up? We must be messing this up?”

KM: She really helped me through the whole experience because it’s daunting to walk onto a set with Kristen [Wiig] and Melissa [McCarthy] who are two of my favorite comediennes of all time, even though there also two of the nicest people in the world.

KW: Leslie, what did you channel in order to come up with your character, Patty?

LJ: It wasn’t hard. Paul kind of based a lot of her on my realness and how I like to keep it real. But I enjoyed the historian part of her personality, too, because I got to show another side of myself.

LJ: Oh, my God! That was such a fun night! We shoved a bottle into the… [Clams up] We probably shouldn’t talk about that part. [Both LOL]

KM: Anyway, you gave me lectures about rap all summer. I took notes on the stuff you taught me.

KW: One thing I really liked about Ghostbusters was how each of the four leads was able to showcase her own distinct brand of humor. I thought that was fabulous.

KM: Thank you. I think Paul really wanted to have no overlap. And I don’t think there was any overlap. This was four different kinds of gals and he just let us do our thing. And we got along really well and it was so much fun.

KW: And what did you channel to come up with your character, Holtzmann?

KM: Oh, honey, that’s just me. I didn’t have to do a lot of work there. I really like science. I try to have a joyful attitude. And often I say weird stuff without meaning to.

KM: That’s an interesting question. I would hope that I see what I look like, but I’m not sure. [Chuckles]

LJ: I see a crazy person, literally! [LOL] Someone who’s insane in the membrane. [Laughs some more]

KM: That’s what I see for myself, too, which is why we’re such good buds, right?

LJ: Exactly! because we respect the craziness.

KM: She can’t say that for the papers, honey.

LJ: That’s not for publication, baby.

KW: Is there any question no one ever asks that you wish someone would?

LJ: Yeah, no one ever asks me what role do I really want to play.

KW: Okay, what would be your dream role?

LJ: I want to do a biography of Pearl Bailey. I think she’s awesome.

KM: Kate, is there any question no one ever asks that you wish someone would?

LJ: No, they’ve run the gamut with me.

KM: I’m a big introvert, I’m very quiet, and I like to sit in silence at home with my cat, Nino, who is my whole world, or most of it. So, that’s different. I don’t know whether you get that or not.  It’s a total surprise, but I can believe it. interesting.

LJ: I am clean when you see me on the red carpet. I’ve washed myself and put on makeup and combed my hair. [Giggles]

KM: There are a lot of places in the world I’d like to visit, like Laos, but I don’t know whether I’ll ever make it there. I’d love to go to Laos and Kazakhstan and some other places I wouldn’t feel comfortable traveling to alone. But I haven’t found anyone to go with me yet. Maybe soon.

KW: Thanks again for the time, Leslie and Kate. Best of luck with Ghostbusters, and I hope to talk to you both again for the premiere of Masterminds.

KM: Have a good day.

To see a trailer for Ghostbusters, visit: https://www.youtube.com/watch?v=w3ugHP-yZXw