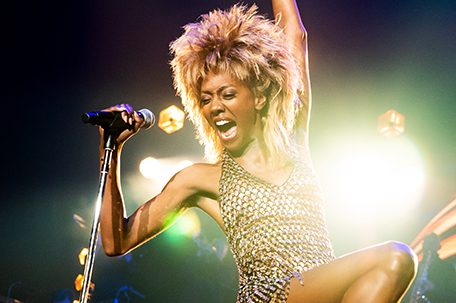 in ‘Tina – The Tina Turner Musical’

ABOVE PHOTO: Zurin Villanueva as ‘Tina Turner’ in the North American touring production of TINA – THE TINA TURNER MUSICAL.  (Photo by Matthew Murphy for MurphyMade, 2022)

Ann Nesby is a legendary singer, songwriter and actress with a career that spans over three decades.  The six-time Grammy nominee and two-time Grammy Award winner first gained notoriety as the former lead singer of the Minneapolis-based soul ensemble Sounds of Blackness. As a songwriter, Nesby has worked under the direction of dynamic duo Jimmy Jam and Terry Lewis, and well-known musical director James “Big Jim” Wright, co-writing songs for Gladys Knight and Patti LaBelle. Nesby has gone on to release eight solo albums and has shared her powerhouse vocals with audiences all over the world.

Additionally, Nesby has always had a love for acting. Early in her acting career, Nesby was the headliner for Tyler Perry’s stage production, “I Know I’ve Been Changed.” She has also landed roles in various film and television shows such as Ava Duvernay’s “Queen Sugar,” Netflix’s “Hap and Leonard,” “Demolition Man,” “The Fighting Temptations” and more.

Now, Nesby is returning to her theater roots, taking on the role of Tina Turner’s grandmother, Gran Georgeanna, in the 12-time Tony Award nominated “Tina- The Tina Turner Musical.” Nesby spoke to the SUN about her role in the show and her admiration for the incredible woman that is Tina Turner.

Nesby’s love for music was fostered in her household and further developed in the church.

“My beginning was in church. I came from a musical family, and we had no other choice because it was church all-day Sunday, all week long and the music was always in our home. There was no escaping it and I loved it.”

After Nesby’s parents took her to see the movie “Imitation of Life,” her desire to sing and perform professionally was solidified.

“I was in the balcony looking down at the screen, and I heard Mahalia Jackson singing in the movie and it pierced my heart at that point,” she said. “I had heard my mother singing Mahalia Jackson songs and it kind of came full circle for me. So, at that point, I must’ve been five years old, and I knew that’s what I wanted to do.”

Nesby expressed her gratitude for being able to live out her dreams of being a performer.

“Being able to do what you love as a career is always rewarding,” she said. “I think in order to stay in this business you have to love what you do, otherwise you probably will be miserable. It’s more than just lights, action, and cameras. It’s hard work, it’s early mornings and late nights, hurry up and wait… but I thank God that I had the opportunity to travel and see the world

otherwise, I don’t know what I’d be doing. I do know that when God blesses us with gifts, it’s not for ourselves… we’re blessed to be a blessing. It’s always a wonderful opportunity to be able to share and also, it’s always a privilege to have people say how they’re blessed from your gift because it encourages the artist as well.”

Nesby has taken her gifts and shared them with the world and continues to do so seamlessly in multiple mediums. Her work with the James Cleveland Gospel Workshop of America led her to work with Donald Lawrence in his first theatrical number “Sing Hallelujah” and sparked her love for theater.

“I went to visit my sister in Minneapolis, and they (Sounds of Blackness) were doing a theatrical number,” Nesby recalled. “Sounds of Blackness is also a theatrical company as well as a recording corral. They were doing “The Night Before Christmas: A Musical Fantasy,” which they won their second Grammy for, and I went in and took a role in that. From that point, I was an opportunity to meet Jimmy Jam and Terry Lewis with Janet Jackson. Everything was just history from there and being in the right place at the right time.”

Nesby was in the right place at the right time once again when she got the call about the role of a lifetime in “Tina – The Tina Turner Musical.”

“My agent called us and said that he had a role that he felt like I could not pass by,” she said. “Of course, they tell you that about every role, but when he told me what it was, there was no way that I could possibly say no!”

“I’m a respecter and huge fan of Tina Turner,” she said.”To have the opportunity to play her grandmother and to be able to tell her grandmother’s life story in the show with Tina… I have so much respect for her grandmother. She was one of the nurturing parts of her life that knew she had the gift early on and inspired her. She wasn’t selfish in keeping her there, she pushed her to go forward and pursue. To see Tina’s life come to life on stage is absolutely incredible.”

Nesby doted on her cast mates and spoke about her appreciation of sharing the stage with multiple generations of talent.

“Zurin Villanueva and Naomi Rodgers are incredible Tinas for the show,” Nesby said. “Garrett Turner plays the part of Ike. There are so many incredible young people. Our young Anna Mae, young Tina (Ayvah Johnson, Aniya Simone u/s) is nine years old. When you hear the gifts that these young people bring forth every night on cue, it is just a blessing to be a part [of]. My favorite part of me traveling (with this show) is me having the opportunity to watch the talented and classically trained young people that are so serious about their craft and getting it right to be able to tell Tina’s story.”

Tina Turner’s musical catalog is one of the most celebrated in history. Audiences can look forward to seeing and hearing her story told through some of their favorite songs, as well as an introduction to new additions.

“There are two songs that I really love and that is the very first number that I do — I’m biased,” Nesby said. “The number I do with her when I have to tell her to leave to go and be successful, it’s called “Don’t Turn Around.” The other one is “Proud Mary” and I’ve always loved that number. She says in the show, ‘I wrote that one by myself.’ Anyone living that’s not under a rock knows “Proud Mary” and if you’ve seen Tina Turner perform it, it has to be one of your favorites.”

Fans of Tina Turner appreciate her musical catalog and her electrifying presence on stage, but for Nesby, “Tina – The Turner Musical” gives audiences and fans insight into the incredible woman that Tina Turner is.

“Having read “I, Tina,” it’s really inspiring to understand every part of her life, from rags to riches,” Nesby said. “You realize every night that not only is Tina an icon in rock and roll, but she’s an inspiration not only for Black women but for women everywhere, across the board. Sexism, racism, the things that she endured traveling, the things that she endured working at a late age in her career as an older woman that God blessed with success. Then us working every night, and so many people being employed all over the world doing the Tina Musical — she’s still giving back to the world. Watching the show every night, it never gets old — it’s such a great show. You just have to come see it!”

In addition to her work in “Tina -The Tina Turner Musical,” Nesby continues to record and is currently working on an album due to be released in 2023. To support Ann Nesby, be sure to follow her across social media platforms @AnnNesby and visit her website at: www.annnesby.com.

“Tina-The Tina Turner Musical” will be at The Academy of Music November 22 through December 4. Visit: www.kimmelcuturalcampus.org for more details on tickets and showtimes.