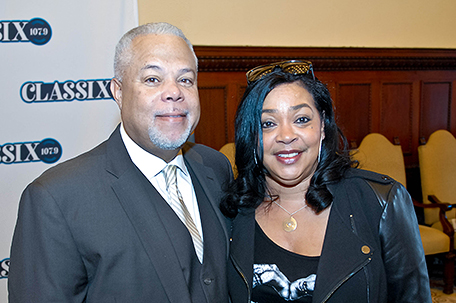 ABOVE PHOTO: Lady B takes a photo with State Sen. Anthony H. Williams at the City Hall press conference this week. She returns on the airwaves to her new radio home Feb. 11 on Classix 107.9-FM. (Photo: Bill Z. Foster)

City officials join Lady B at City Hall for her announcement

Legendary talk show host and hip hop icon Wendy Clark, better known by her on-air name Lady B, will be returning to radio.

The Philadelphia native announced her new radio home on Classix 107.9-FM in the Mayor’s Reception Room at City Hall recently. 107.9-FM plays R&B from the 70’s & 80’s – the perfect mix of music for both Lady B and Philly.

“Philly is known for cheesesteaks, pretzels, the Eagles and Lady B,” said Colby Tyner, vice president of programming for Radio One. “She is one of the most dynamic voices the city has ever had. She is beloved and the city we are excited to have her back in the Radio One family.”

“I’m so blessed, excited, and appreciative that OUR voice is coming BACK to the airwaves,” Clark said.

Clark is one of several groundbreaking female rappers in hip hop and was one of the first to record a single “To the Beat Y’all”, the title of which became a stock rap phrase. “To the Beat Y’all” was first released by TEC, a local Philadelphia-based record label, and released again in 1980 by Sugar Hill Records.

As one of the first DJs to play rap records on the radio outside New York, Lady B played artists such as Will Smith and Soulsonic Force at the start of their careers. In 1984, Lady B moved to Philadelphia’s Power 99 FM and started the program The Street Beat, which ran until 1989. In 2002, she received the “Philly Urban Legend Award”.

She later broadcast for Sirius Satellite Radio in New York City. She also worked for WRNB 100.3 in Philadelphia until December 2017.

Treat Lady B like the Philly radio icon she is