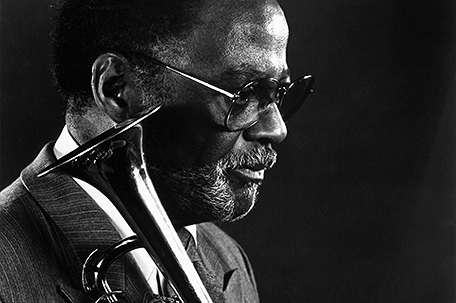 NEW YORK–Legendary jazz trumpeter Clark Terry, who mentored Miles Davis and Quincy Jones and played in the orchestras of both Count Basie and Duke Ellington and on “The Tonight Show,’’ has died. He was 94.

Terry’s wife announced his death on his website late Saturday night. Gwen Terry’s statement did not provide further details, and she did not immediately respond to messages from The Associated Press.

“Our beloved Clark Terry has joined the big band in heaven where he’ll be singing and playing with the angels,’’ Gwen Terry wrote on the musician’s official Facebook page.

Terry had been in failing health in recent years after suffering from extreme complications of diabetes. Terry, who had been living in Arkansas, entered into hospice care earlier this month.

“The world has lost one of the greatest trumpeters to ever grace the planet,’’ Quincy Jones wrote on his Facebook page. “Clark Terry was my first trumpet teacher as a teen in Seattle, my idol, and my brother. When he left the Basie and Ellington bands, also two of my idols, to join mine, it was one of the most humbling moments in my life.’’

Jones honored his mentor by co-producing the documentary “Keep on Keepin’ On,’’ which premiered last September and focused on the relationship between Terry and his young protege, blind jazz pianist Justin Kauflin.

During a career spanning more than seven decades, Terry was a mentor to generations of jazz musicians, starting with Miles Davis, who first met Terry as a teenager growing up in East St. Louis, Illinois, across the river from Terry’s hometown.

Born in St. Louis in 1920, Terry displayed his passion for music as a child, fashioning a makeshift trumpet by attaching a funnel to a discarded garden hose with a lead pipe for a mouthpiece. Neighbors were so upset by the racket he made that they chipped in to buy him his first trumpet from a pawn shop. His earliest inspiration was Louis Armstrong.

After a stint in the Navy from 1942-45, Terry worked in a number of bands before joining the Count Basie Orchestra in 1948. Three years later, he joined Duke Ellington’s band, an experience he referred to in interviews as attending “the University of Ellingtonia.’’

During his 1951-59 stint with the Ellington band, Terry also began playing the rounder-toned flugelhorn, an instrument he helped popularize among jazz musicians.

In 1960, he became the first African-American musician hired as a staff musician at NBC and joined the house band on “The Tonight Show,’’ where he played for nearly a decade. He became known for his spontaneously improvised mumbling scat singing on the show, and his playful routines led to “Mumbles,’’ a 1964 recording with the Oscar Peterson Trio that became his signature song.

Terry appeared as a sideman and leader on more than 900 recordings, including sessions with Thelonious Monk, Charles Mingus, Ella Fitzgerald, Dizzy Gillespie and other leading jazz artists.

Terry also led his own small combos, including a quintet with trombonist Bob Brookmeyer, and a big band that performed abroad on State Department-sponsored tours from 1978-81.

He also was a strong proponent of jazz education, teaching in the classroom and at camps, clinics and festivals and writing jazz instruction books. He mentored young musicians such as drummer Terri Lyne Carrington and singer Dianne Reeves who went on to become jazz stars.

In 1991, Terry was named an NEA Jazz Master, the nation’s highest jazz honor, and received a Grammy Lifetime Achievement Award in 2010.

Terry continued to make occasional club appearances as an octogenarian although his diabetes forced him to curtail touring.

The esteem his fellow musicians felt for Terry was reflected in December when the Jazz at Lincoln Center Orchestra led by Wynton Marsalis took a detour to Pine Bluff, Arkansas, during a day off on their tour to play an impromptu concert for Terry at his hospital.