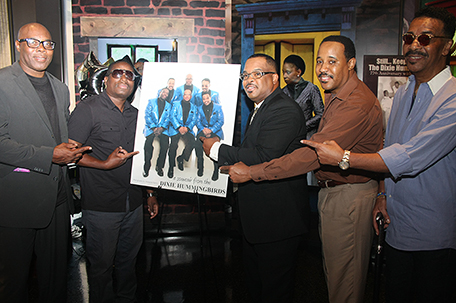 There are few traditions in the African-American community as cathartic and enduring as its gospel music, whose roots can be largely traced back to the 19th century.

A group of inspirational religious songs — known as “Negro Spirituals” — often referred to the next life, a life free of the burdens of slavery, cruelty and suffering. Their lyrics also often served as encoded travel instructions during the days of The Underground Railroad, helping hundreds of enslaved persons to escape to freedom and identify safe houses. After slavery ended, the spirituals evolved into early gospel music.

During the golden age of African-American gospel music in the 1940s and 1950s, groups like The Dixie Hummingbirds traveled throughout the country performing in churches and halls — namely the volatile Jim Crow South — often at great peril.

Eventually, these groups began to face stiff competition as secular and modern gospel music began taking hold, and yet they endured. After 90 years and several incarnations later, the group is still going strong, with no signs of slowing down. Like the music itself, they are an institution.

“In 1928, when Mr. Davis started The Dixie Hummingbirds, he didn’t have a clue that they would last; he said that all he wanted to do was to just try and make a living, and they stayed with that,” said Ira Tucker, Jr., leader of the legendary group during a recent press conference at the African American Museum in Philadelphia. In 1938, his late father, Ira Tucker Sr., became lead singer in the group when they signed with Decca Records, where they were propelled to national prominence. Tucker Sr. remained active in the group until his death in 2008.

“As different members of the group left, and others replaced them, they came in with the same feeling and with the same drive, “Tucker said. “That’s what kept the group going.”

“The ‘Birds have been my life,” Tucker said. “And now they’re my future. Let’s fly.”

The Dixie Hummingbirds were formed in 1928 in Greenville, South Carolina. They made their recording debut in 1939 on Decca Records. Their singles include “Soon I Will Be Done with the Troubles of This World,” “Little Wooden Church,” and “Joshua Journeyed to Jericho.” In 1942, the group relocated to Philadelphia, where founding member James B. Davis purchased a house at 23rd and Girard Avenue, using it as a rehearsal space. In 2017, the Commonwealth of Pennsylvania and the City of Philadelphia commemorated the rich heritage of The Dixie Hummingbirds with a historical marker at the location.

The group’s influence has spread not only over the world of spiritual music, but also inspired secular artists such as Jackie Wilson, Bobby “Blue” Bland and The Temptations.

The Dixie Hummingbirds’ backed up Paul Simon on his 1973 hit “Love Me Like a Rock.” Their own version of the song — recorded at Philadelphia’s legendary Sigma Sound Studios with Stevie Wonder and Paul Simon — later won them a Grammy Award for “Best Soul Gospel Performance.”

During the press conference, Wonder phoned in, and said that the legendary group was “unsurpassed in the history of African-American music.” He produced the group’s’ 70th anniversary tour, which included other gospel music pioneers The Staples Singers and The Five Blind Boys of Alabama.

The initial round of activity combining live performances, special appearances, salutes and tributes will include the following:

• Sept. 30: A gospel breakfast tribute to the Dixie Hummingbirds hosted by Mighty Writers as the final event of MightyFest, a four-day student literacy festival, will be held at Girard College in Philadelphia beginning at 10 a.m. Tickets are $75 at www.mightywriters.org.

There are many tributes to the legendary group here in their adopted city. In 1988, the group was honored by the Philadelphia Music Alliance with a bronze plaque along The Walk of Fame. They have also been immortalized via a large colorful mural at 859 North 15th Street, just a few blocks away from another tribute — “Dixie Hummingbirds Way” — located at 15th & Poplar Street

In 2000, The Dixie Hummingbirds were ceremoniously deemed a “national treasure” by the National Endowment for the Arts at the Library of Congress inWashington, D.C. That same year, the group’s 1946 recording of “Amazing Grace” was inducted into the Grammy Award’s Hall of Fame. One of their uniforms and a Grammy Award is on display at the National Museum of African American History and Culture in Washington, D.C. They have also been honored by the Vocal Group Hall of Fame, the Gospel Music Hall of Fame and the American Gospel Quartet Hall of Fame.

Performing Arts series presents A Gospel Celebration, honors an art form with the power to uplift

Philadelphia Celebration of Gospel At The Mann