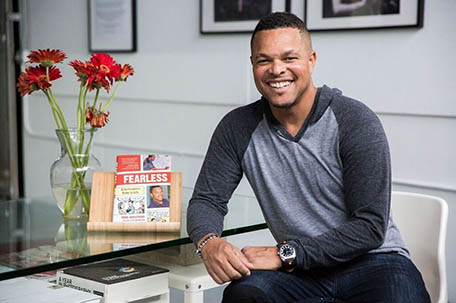 Philadelphia native and cartoonist Robb Armstrong has been making waves and history his entire career. He created his comic strip “Jump Start” in 1989, currently the most widely syndicated daily comic strip from an African American cartoonist in the world.

“Jump Start” has been featured in over 300 newspapers in North America and continues to gain new fans that span generations. The strip tells the story of the Cobbs, a middle-class Black family living in Philadelphia. The Cobbs family includes Joe, a police officer; his wife Macy, a nurse, their daughter Sunny, son JoJo and twins Tommi and Teddy. As part of Armstrong’s interview with the SUN, he spoke about the journey to creating “Jumpstart,” and shared some valuable lessons he’s learned along the way, as well as insight into what fans can expect from his future work.

Armstrong’s love for drawing began early. He grew up in a single-parent household, and his affinity for art was strongly encouraged by his mother.

“When I was 3 or 4, my mom recorded this in a book,” Armstrong said. “In the book, she would track what my siblings and I wanted to become later in life. There’s an entry from when I was three where I checked off “artist.” She encouraged that. By the time I was 10, I was in art classes outside of school. I was taking a Saturday class at The Philadelphia College of Art. I was the only child in the class. The whole class was comprised of young adults who went to school there. It had a massive effect on me. I started to think of myself as a real artist.”

Armstrong’s mother continued to champion his love for art. She believed in him so much that she sent his first children’s book to several publishers.

“Her approval meant the world to me, and without that, I don’t think anything would’ve come of it,” Armstrong said. “Lots of little kids want to sketch, doodle and draw cartoons from TV, but she never treated it as a doodle or anything other than real art.”

“Around the same time I was taking that art class, I actually put together a quote-unquote “children’s book.” It was four pages stapled together at the top,” he continued. “It was about a talking bird, Mr. Birdy, this blue bird that Timmy rescued. My mother thought this was sublime — she was way too excited about Mr. Birdy the bluebird and sent it off to all these publishers. They politely sent it back. I broke down in tears, and she said, ‘Son, listen — they don’t understand it yet, but you’re going to be an author, you’re going to be an artist, you’re going to have your own books, and all of your dreams are going to come true, but you have to stick with it.’”

Sticking with it is exactly what Armstrong did. He continued studying art at Shipley, where he met an art teacher who shifted how he approached his craft.

“It really prepared me for life as a professional cartoonist,” Armstrong said. “I had an art teacher at Shipley who stopped me from doing derivative work, being unimaginative, and replicating things that I had seen. She stopped me from drawing comic books and Spider-Man. She said ‘stop doing that’… but it amazed my friends. She said you’ve got to ignore them. ‘They think that’s art. It’s not; it’s useless.’ Artists are put here to create, to bring something brand new to this world. The world is counting on artists to do that. We’re not looking for a human Xerox machine. She said, ‘You have talent; there’s no question about it. I need for you to think for yourself, even if it’s risky, and create.’ Her advice — I parrot it whenever kids come to me.”

After attending Shipley, he went on to study at Syracuse University. While at Syracuse, he began writing for the school paper. During his time at the paper, Armstrong found his voice, and the concept for the foundation of “Jump Start” was born.

“There was a school newspaper called The Daily Orange,” he said. “I immediately found solace working at The Daily Orange. I did a comic strip called “Hector” from 1981-1985 until I graduated. The reason I call it solace is because that year 1981, when I entered Syracuse, my mother succumbed to cancer. She hid it from me for some time, but once she told me the news, she spiraled fast. I immediately sought out this opportunity. I had this comic strip — my solace — and “Hector” was fire. Kids loved it… it was funny and edgy. “Hector” was just this Black kid at Syracuse causing trouble, kicking up dust, complaining about stuff, not doing work, acting a fool, girls, and all that.  I wasn’t entirely that. He was an amalgam of a lot of the kids who I had known, including myself, but I related to Hector’s predicament very well. I was able to communicate that angst to my fellow classmates, and it was incredible.”

Armstrong continued to work on “Hector” developing the characters. “Hector” would eventually become “Jump Start.”  That transformation from Hector to “Jump Start,”  however, was not a seamless one, and came with a great deal of rejection.

“Some artists are temperamental,” Armstrong said. “When you say you don’t like their stuff or I don’t get this, it hurts their feelings. Your work doesn’t have any feelings. Your work can be improved. To get syndicated, in my case it required almost five straight years of rejection. If I would’ve remained sensitive, temperamental, or emotionally connected to my work, there’s just no possible scenario where years of rejection would’ve resulted in anything good.”

Thankfully, Armstrong’s tenacity resulted in a lot of good.  Although he experienced a great deal of rejection early on, Armstrong was also encouraged to keep going after meeting one of his heroes — groundbreaking cartoonist Morrie Turner.

“Morrie Turner was the first Black person in this country to be nationally syndicated,” Armstrong said. “When I was a little boy, I would read the Philadelphia Bulletin, and “Wee Pals” was Morrie Turner’s comic strip. My childhood was really affected by Morrie Turner. When I tried to get syndicated, he was already in hundreds of newspapers. I walked into the Tribune when I was 17 and got my first strip published. I would talk my talk and show my work and had some success. I walked into The Daily News, and I was talking to this guy. He told me you wouldn’t be happy doing one comic strip; you have to be syndicated, [that] you have to be in a lot of papers to make a living. He mentions this guy out of the blue and says, ‘Why don’t you give Morrie Turner a call?’ and slides his home number across the desk. “I called him, and a few hours later, he called me back and said, “How can I help you, brother?”

“He was such a nice man,” Armstrong continued “We were very close until he died at the age of 90. He just loved me, loved my work, and said I reminded him of himself. When I needed someone to say something positive, he would say, ‘You got it.” Morrie Turner helped me get my first contract. He passed my stuff along to someone at United Feature Syndicate… the same syndicate that distributed “Peanuts.” They said, “Find a way to New York City and bring a lawyer.”

Armstrong’s dedication to his art, paired with his steadfast approach and ability to pivot, resulted in the “Jump Start” comic strip his fans know and love today.

“I believed I would have a career doing “Hector”– I was very connected to the idea and the character,” Armstrong said. “I thought when I graduate, I’ll allow him to graduate, and I’ll figure out some kind of career for him, but it didn’t work. It didn’t translate, and I couldn’t continue it.  I was fraught with rejection, and it lasted for years. I have to change him, give him a different job, a new set of parents. It just took some time to transform what I was doing then into the real world. But I signed a deal in 1989 — that’s lightning fast. It took about a year to develop “Jump Start” into a “syndicatable” comic strip. I had to really examine myself and think, “Where do I stand on things?” I had to accept that I had an unusual upbringing. I had to accept all my tragedies as triumphs.”

Thankfully Armstrong’s story — triumphs and tragedies alike — continue to gift his audiences with new innovative content with the beloved characters of “Jump Start.”  Fans of “Jump Start” can look forward to seeing the Cobbs family in another medium. CBS is currently in the process of adapting “Jump Start” into a live-action multi-camera sitcom with a release date TBD.

In the interim, visit: www.gocomics.com/jumpstart to read “Jump Start.” You can also see more of Robb Armstrong’s work at: www.robbarmstrong.com and pre-order his book “On A Roll! A Jump Start Treasury” on Amazon. Also, follow Robb Armstrong on Facebook @Robb Armstrong and on IG: @robbtarmstrong.

Jump-start success at school with wellness at home