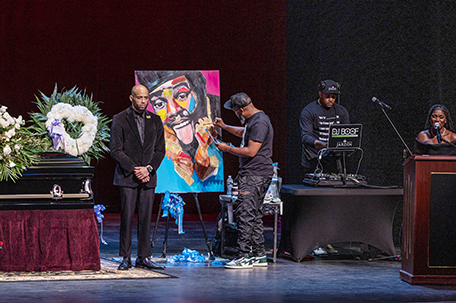 ABOVE PHOTO: People attend the funeral services for the late Marcel Theo Hall, aka “Biz Markie” at the Patchogue Theater for the Performing Arts on Monday, Aug. 2, 2021 in Patchogue, NY. (Alejandra Villa Loarca/Newsday via AP)

PATCHOGUE, N.Y.  — With laughter and tears, songs and stories, friends and family of Biz Markie celebrated his life and legacy at a funeral Monday, remembering the rapper as larger than life and full of love.

“He cared for people, he had a way of making us laugh through our pain,” said Rev. Al Sharpton in his eulogy at the Patchogue Theatre on Long Island, where Biz Markie’s black coffin was placed center stage, an arrangement of white flowers on top.

“He’d come in a room and his presence didn’t have to be announced, it was felt,” Sharpton said.

Markie, known for the 1989 classic “Just a Friend,” died last month at the age of 57. His death brought a stream of tributes from his musical contemporaries and those who were simply fans.

Among those who attended the funeral were Ice-T and Fat Joe, as well as Montell Jordan and Al B. Sure.

Markie, born Marcel Theo Hall, was known for his lighthearted ways, and was the self-proclaimed “Clown Prince of Hip-Hop.”

“The thing I’m going to miss the most about him was every time he would see me, his face would just light up with that Chiclet, toothy smile,” said his widow, Tara Hall.

“He made me laugh every day,” she said. “That is not hyperbole. That is a fact.”

A New York native, Markie began his music career in 1985 and became known in the mainstream in 1989 with the platinum-selling song “Just a Friend,” which made VH1’s list of 100 greatest hip-hop songs of all time.