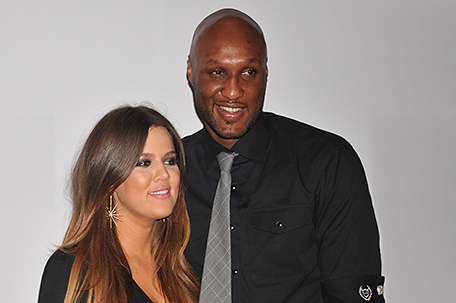 By Greg Beacham and Sally Ho

Cut loose by his beloved Los Angeles Lakers, followed everywhere by reality television crews, the humble kid from Queens who married into the Kardashian clan saw his life spiral out of control, and so did everyone else.

Khloe Kardashian tried to hide his addictions, then told the world she couldn’t save him. The two-time NBA champion landed on Skid Row, a regular tabloid target.

Then he seemed to drop out altogether before he was found unresponsive in a brothel and hospitalized, bringing his estranged wife, his former teammates and the world’s attention back to his side Wednesday.

Hospital authorities would not comment on the condition of the 35-year-old former NBA forward, but the Rev. Jesse Jackson was among his visitors Wednesday. Jackson said Odom was on life support and improving.

“Apparently from what the doctor said, he was much better off today than yesterday. He at least has some responsiveness now,” Jackson said. “He’s got tubes in him now, but we felt inspired by his presence.”

Odom, who was embraced by teammates and television fans alike for his Everyman approach to fame, was found face-down and alone Tuesday after spending four days at the Love Ranch, a legal Nevada brothel.

Odom started “throwing up all kinds of stuff” after a 911 operator told them to turn him on his side, Love Ranch owner Dennis Hof told The Associated Press in a phone interview. Odom had “spent time socializing with some of my girls,” but wasn’t seen taking any illegal drugs, Hof said.

In a recording of a 911 call, Hof’s spokesman Richard Hunter said Odom was breathing but in a “deep sleep” and had fluid coming from his nose and mouth.

“He sounds like he’s snoring a little bit. But he is breathing consistently,” Hunter said.

It was Odom’s first visit to the Love Ranch, and he told employees he did cocaine before he arrived Saturday, Hunter said.

Odom also took up to 10 tabs of an over-the-counter sexual performance enhancer over the course of his stay, Nye County Sheriff Sharon Wehrly said at a news conference. Sheriff’s Detective Michael Eisenloffel described the enhancers as supplements and said Odom bought them at the brothel.

With a search warrant, authorities took a blood sample from Odom early Wednesday to determine what was in his system. The results could take weeks, Eisenloffel said.

Odom spent most of his 14-year NBA career in Los Angeles with the Lakers and Clippers, becoming a fan favorite before he sought even more fame with the Kardashians.

His one-month courtship of Khloe before their huge 2009 wedding was taped for the E! network, and Odom appeared on nearly two dozen episodes of “Keeping Up with the Kardashians” as well as other family spinoffs, including his own “Khloe & Lamar” show in 2011 and 2012.

Khloe Kardashian called him “Lam-Lam” and worried openly about him on the show. Even after they split in 2013, cameras recorded her calling him and checking on his welfare.

People always seemed to root for Odom, whose prematurely weathered face wore the impact of his personal tragedies in a friendly way. And news of his hospitalization brought an outpouring of dismay and encouragement from his friends and family.

Kobe Bryant joined Kardashian and some of Odom’s childhood friends at his bedside after a Tuesday night Lakers game in Las Vegas.

“I’m obviously hoping that he can pull through this, and that in some fortunate way this becomes the beginning of a different ending,” said Derek Fisher, the New York Knicks coach and Odom’s longtime teammate with the Lakers.

Even his once-estranged father, Joe Odom, was at the hospital, according to his grandmother, Florence Odom.

Authorities were called to the Crystal, Nevada, brothel at about 3:15 p.m. Tuesday. The 6-foot-10 Odom was too tall for an available helicopter, so he was driven by ambulance to Sunrise Hospital & Medical Center in Las Vegas.

In a statement, Hof, the brothel owner, said: “He largely kept to himself, and at no time did he engage in any drug use in the presence of anyone in the house. He did drink alcohol from our bar, and was taking some herbal sexual enhancement capsules.”

Hunter added Love Ranch workers are trained to “stop the party” if drugs are seen, and Odom was aware of the brothel’s strict anti-drug policy.

Odom was staying in its “best VIP suite” on an open-ended reservation, and was accompanied by two women, Hunter said. He spent an amount beyond five figures, which would have been negotiated privately between the women and Odom, he said. The prostitutes are independent contractors who get 50 percent of the price.