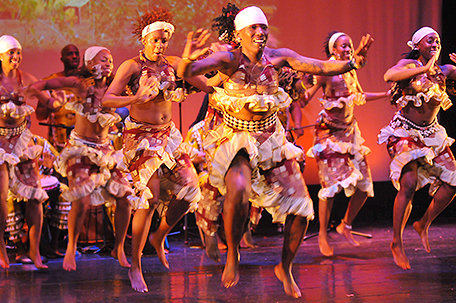 Philadelphia’s Kùlú Mèlé African Dance & Drum Ensemble is celebrating its 50th anniversary with the world premiere of its new spellbinding production, “Ogun & the People: An Ancient Story with Lessons for Today’s World,” with a Dec. 1, 3:00pm matinee at the Annenberg Center for the Performing Arts, located at 3680 Walnut Street.

A second show was added after the Saturday, Nov. 30 show sold out. Founded in 1969 by legendary drummer Baba Robert “Ibikunle” Crowder (1930-2012), this dynamic ensemble is the oldest, continually performing African dance and drum ensemble in the nation.

The full-length, multi-media production explores a pataki (sacred parable) of the Yoruba deity Ogun – warrior, protector, dispenser of justice who brought civilization to the world – and the effect on the people when he leaves the village and retreats into the forest.

The ensemble will present the Afro-Cuban interpretation of the story. Support from the Pew Center for Arts & Heritage allowed Kùlú Mèlé to visit Santiago, Cuba to study the dance, music and spiritual traditions that form the basis of the story, along with world-renowned Ballet Folklorico Cutumba in order to develop the production.

“This trip was a long time in the making,” said artistic director Dorothy “Mama Dottie” Gordon- Wilkie, who along with her husband, music director John “Wilk” Wilkie, have been with Kùlú Mèlé since 1971. “I always dreamed of taking the group to Cuba but didn’t know how I was going to do it. It took years of planning and thinking and then one day it hit me that we should go there and study with Cutumba, like we went to Africa and studied a play with Les Ballets Africains.”

Her vision for the production has been realized just as she visualized it, Mama Dottie said.

“It’s one of my favorite patakis about Ogun and Oshun, how he got angry, went into the forest and the whole community just went down,” she explained. “You know, Ogun is the creator of minerals and iron. When he went into the forest, everything we need to survive just stopped. Developing this production with Cutumba is everything I envisioned and more. People are going to love this performance!”

The ensemble released its new commemorative book, “Kulu Mele’s Ogun & the People: Celebrating 50 Years (1969-2019),” on October 18, which was proclaimed Kùlú Mèlé Day by Philadelphia’s City Council. The book may be purchased on the ensemble’s website and will be on sale at the show.

Under Crowder’s expert tutelage, the ensemble has continued the traditions of iconic dancer/choreographers Pearl Primus and Katherine Dunham by performing authentic dances of Africa and its diaspora, and became a major part of the foundation of Philadelphia’s Black Arts Movement of the 1960s and 1970s.

Kùlú Mèlé (translated as “voice of our ancestors”) helped give birth to a cultural renaissance in Philadelphia’s African American communities and attracted those who were eager to study and experience African culture through the performing arts. Scores of dancers and drummers were trained by Crowder at his longtime headquarters in West Philadelphia’s Lee Cultural Center.

The organization has expanded its repertoire to include the musical and movement genres of Cuba, Brazil, Haiti, Nigeria, Guinea, Ghana and the Senegambia region, as well as African American art forms like hip-hop, the bop, cha-cha and the slop. Through the direction of the Wilkies, engaging performances vividly convey the meaning of dancing and drumming in the African and African Diaspora societies from which these traditions originated.

Over the years, the husband and wife team traveled with Crowder to Guinea, Senegal, Ghana and Cuba to study the traditional dance and drum art forms that the group performs.

As keepers of the culture, the Wilkies continue Crowder’s legacy of advancing African culture by training and mentoring dancers and drummers in order to preserve the culture for future generations.

Kùlú Mèlé offers an arts education program for children and classes for adults.

“In the years to come, we want Kùlú Mèlé to be known as one of the groups that passed the torch for the culture,”  Mama Dottie said. “We want people to know that we sacrificed our lives to the culture. We kept the culture going. Kùlú Mèlé truly is the voice of our ancestors.”

“The young people have their culture,” added Wilk. “We just want them to know that this is part of your culture, too.”

The fruit of our African ancestors’ dreams — Kùlú Mèlé continues to keep the culture alive for future generations and serves as an educational vehicle and source of outstanding entertainment for audiences of all ages and backgrounds.

“Ogun & the People” is supported by The Pew Center for Arts & Heritage. The world premiere is co-commissioned by the Annenberg Center for the Performing Arts and the Orisa Community Development Corporation. PNC Arts Alive is the official presenting partner for Kùlú Mèlé’s 50th anniversary season (1969 — 2019).