“King Richard” of the Tennis Courts 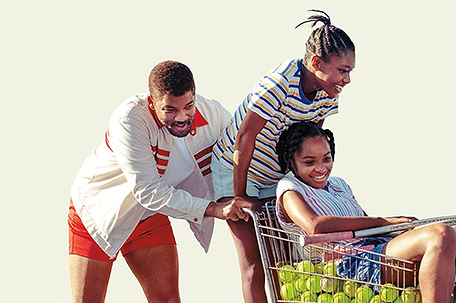 In the movie “King Richard,” Will Smith portrays one of professional tennis’s most complicated figures.

The story of Richard Williams, father of the most successful sisterhood duo in the history of tennis and arguably the history of sports, is probably one of the more fascinating stories in American sports in its own right.

Through sheer hustle, determination, and some might say hubris, Williams was determined to turn his daughters Venus and Serena into the tennis superstars they would ultimately become by giving them access to the best coaching and training venues, but only on his terms.

This fascinating story is the basis of the new movie “King Richard.”

Philadelphia’s own Will Smith portrays the man whose focus on creating two well-rounded women who just happen to play tennis led to the creation of a pair of history makers.

Director Reinaldo Marcus Green takes you through the journey of the man who became one of the first inductees into the American Tennis Association’s Hall of Fame for guiding his daughters into tennis greatness.

Smith gives a solid and realistic performance as Williams, embodying his mannerisms, his walk and dialect. You could make a strong argument that this might have been one of Smith’s best performances in a movie in quite some time.

What was really compelling was Smith’s portrayal of Richard Williams dogged drive to groom his little girls into the tennis icons they would ultimately become. Smith also revealed the demanding, loving and sometimes stubborn to a fault family man that he was to Venus and Serena.

One of the more compelling scenes in the film was a scene that was based on a true account was when Venus (played by Saniyya Sidney) and Serena (played by Demi Singleton) were in a country club and attempted to order hamburgers at country club and put them on a tab. Richard Williams stopped them because he didn’t want his daughters to have a sense of entitlement.

The film also captured the controversy surrounding Richard Williams’ stubborn refusal to let his girls play on the junior tennis circuit for fear that they would end up burned out from the sport the way that three-time grand-slam winner Jennifer Capriati did early in her career.

Unlike most sports films, there isn’t the dramatic win of the young stars who came from that “rags to riches” story. The main climax of the film was Venus Williams stirring 1994 loss in three sets to 14-time grand-slam winner Arantxa Sanchez-Vacario, who was the no. 1 player in the world at the time.

It was one of the first sports films that I’ve seen that doesn’t have the often-cliched player hitting game-winning home run to save the day for the protagonist. In “King Richard,” Venus Williams’ loss to Sanchez-Vicario was important because it was the first match that reflected that the Williams sisters were on the rise.

A more underrated performance in the film that is worth noting was that of Aunjanue Ellis who played Oracine “Brandi” Williams. Ellis did a good job of being the strong-willed wife of Richard Williams who made sure that the Williams sisters weren’t’ pushed too hard by their father.

The film does have its flaws, because it was a bit too long and it dragged at times, but the story of Richard Williams through the acting of Smith can help you get through those lull periods of the film.

Overall, it was a solid film about an African American father who stayed with his children and guided them to the dream of a lifetime.

“King Richard” premieres in theaters and on HBO MAX next Friday.