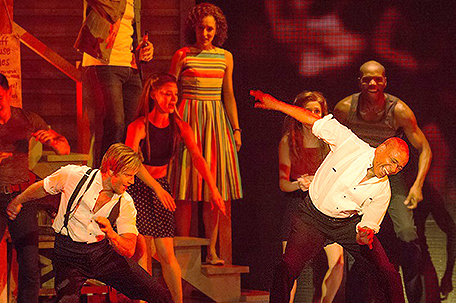 Tickets on Sale to subscribers now!

The Kimmel Center for the Performing Arts and The Shubert Organization announce the addition of two productions to the stellar 2016-17 Broadway Philadelphia season. Nouveau cirque troupe “Cirque Eloize” will return to Philadelphia with its new production “Saloon – A Musical Acrobatic Adventure” January 13–14, 2017 and back by popular demand is “Dirty Dancing – The Classic Story” on Stage May 16–21, 2017, both at the Kimmel Center’s Merriam Theater. The added shows join a sensational lineup comprised of award-winning touring Broadway hits with a combined 29 Tony Awards® and 18 Drama Desk™ Awards. Kimmel Center season ticket holders will receive priority access to both shows starting today, June 20 and general public can purchase tickets to individual shows beginning September 10.

“We are delighted to add these fantastic shows to our upcoming Broadway Philadelphia season,” said Anne Ewers, President & CEO of the Kimmel Center for the Performing Arts. “Next season is already jam-packed with the best of Broadway and these fan favorites amplify the allure of this must-see lineup!”

Broadway Philadelphia is presented collaboratively by The Kimmel Center for the Performing Arts and The Shubert Organization, with productions at the Academy of Music, Forrest Theatre, and the Merriam Theater. 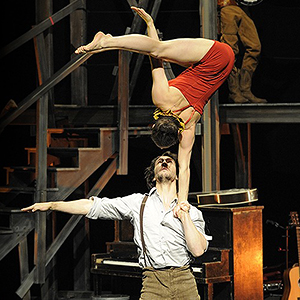 “Cirque Eloize” will present its brand new original creation: “Saloon – A Musical Acrobatic Adventure.” Inspired by a rich historical and musical heritage, this new adventure promises many surprises. Entering the Saloon means meeting inspiring characters and immersing yourself in a mythical world created by live music and the exhilarating pace of spectacular acrobatic performances.

Imagine this: American is expanding. The railroad is snaking westward. A town comes to life. The Saloon doors swing open revealing a motley cast of characters, each with a tale to tell. In Saloon, dynamic folk music and strains of fiddle set the tone for an acrobatic comedy that sweeps up the audience in a flurry of energy. True to its origins, “Cirque Eloize” is creating a show that is a heady mix of theatricality, humour, acrobatics, and a return to live music.

“Dirty Dancing – The Classic Story On Stage” is an unprecedented live experience, exploding with heart-pounding music, passionate romance, and sensational dancing. Seen by millions across the globe, this worldwide smash hit tells the classic story of Baby and Johnny, two fiercely independent young spirits from different worlds who come together in what will be the most challenging and triumphant summer of their lives. Featuring the hit songs, “Hungry Eyes,” “Hey Baby,” “Do You Love Me?,” and the heart-stopping “(I’ve Had) The Time of My Life.” London’s Sunday Express says, “This crowd-pleasing stage adaptation hits the jackpot!” Don’t miss your chance to see this record-breaking live theatre sensation. You’ll have the time of your life!

Broadway Philadelphia subscription packages are on sale now. Subscribers save up to 25% off single ticket prices and are offered a variety of exclusive privileges, including the first opportunity to select the best seats in the house and the option to renew their seats each year. Subscribers also enjoy a host of benefits, including free exchanges, priority ticket access, payment plan options, and more.

Six show packages are available now and include Tuesday through Sunday performances of “An American in Paris,” “The Bodyguard,” “The Curious Incident of the Dog in the Night-Time,” “The King and I,” “Cabaret,” and “Fun Home.” Season ticket holders can also opt-in to include “Hedwig and the Angry Inch” in their subscription or add-on any of the following shows: “Mamma Mia!,” “Motown the Musical,” “Wicked,” “Cirque Eloize’s Saloon,” or “Dirty Dancing.”