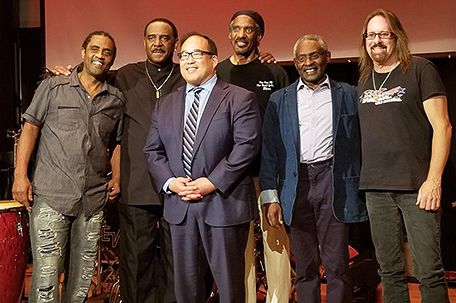 The music organization Kids Rock The Nation presented a donation of 10 guitars to music students on Wednesday, June 13, in conjunction with the Philadelphia Clef Club of Jazz & Performing Arts.

This auspicious occasion —which took place at the Philadelphia Clef Club Concert Hall —was sponsored by Kids Rock The Nation, Inc.

The organization was founded by Blues Musician Anthony Wild to promote self-esteem through musical performance by recognizing and rewarding potential musical talent in children ages nine to sixteen.  Wild created this program while he was recovering from cancer.

The doctor who treated Wild inspired him to create this program as a way of giving back to young people who otherwise would not have the opportunity to participate in music programs, much less be able to obtain a musical instrument.

Ten guitar students were selected by the Philadelphia Clef Club to receive these very valuable instruments, which were donated by the Gibson Foundation.

They were chosen by their desire to learn as well as possessing the motivation to succeed. In addition to receiving a guitar, the students will receive continuing instruction, mentoring from professional musicians,  as well as opportunities to perform.

The recipients of  the instruments were:

Clef Club Artistic Director Lovett Hines, who moderated the affair, stated that this program was the commencement of a program which will be taking place on an annual basis.