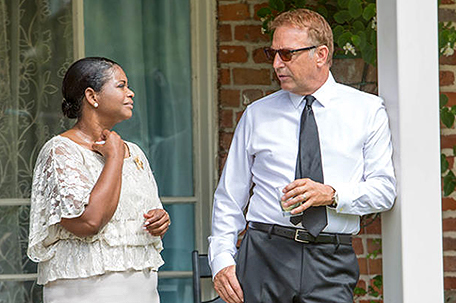 ABOVE PHOTO:  Octavia Spencer and Kevin Costner in a scene from Black and White.

Relativity obviously sees Academy Award potential in the film, as the company will release the Kevin Costner/Octavia Spencer drama Black or White in a limited engagement, starting, December 3, 2014, to qualify for awards consideration.

It will then be followed by a nationwide expansion starting on January 30, 2015.

Written and directed by actor Mike Binder, with Costner co-producing alongside Binder and Todd Lewis, the drama centers on Elliot Anderson (Costner) an attorney widowed after his wife dies in a car crash, and who also is raising his bi-racial granddaughter Eloise, since his daughter died in childbirth. As he struggles with his grief, Elliot’s world is turned upside-down when the child’s African American grandmother Rowena (played by Octavia Spencer) demands that Eloise be brought under the care of her African American father Reggie, a drug addict who Elliot blames for the negligence that led to the death of his own daughter. Elliot finds himself deeply entrenched in a custody battle and will stop at nothing to keep his granddaughter from coming under the watch of his reckless son-in-law.

Earlier this year, while he was doing press for his last film, Draft Day, we talked to Costner briefly about the film. A few related quotes follow:

“My whole life has been instinctual… I have instinctually thought I could do things in my life, and I followed that up by sometimes putting everything I have at risk – my money, my house – to make a movie. I just did it again with Black or White.”

He added that the film was “a rock that I had to push uphill just to make it”:

On the reactions he’s gotten from others who learn he’s made a movie about race:

“I realize that I’m not in battle. I’m not in combat. ‘Ooh, that’s very brave thing to do.’ Well, I’m not in Vietnam. I’m not in Iraq. And if I want to make a little movie about racism, I should do it. Maybe the studio should too.”

On how his projects will be received, Costner says he isn’t worried:

“I’ve never been afraid of things not working. I think it’s an underrated experience in life. I’ve had some wild, wild successes. I try to clean up the oceans, and I try to do things. I’m not afraid to be on the floor.

“I have a strong belief that what I’m doing, other people will believe in it too if I can get it just right. Not that people don’t let me down, not that I haven’t let other people down, but I have a tremendous belief in people and in the common experience.”