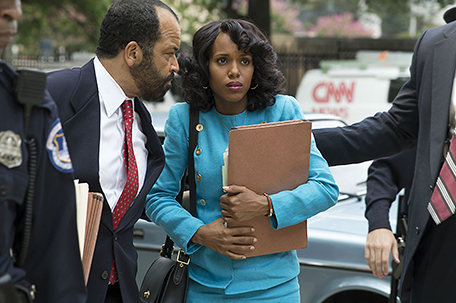 ABOVE PHOTO:  Jeffrey Wright and Kerry Washington in a scene from Confirmation.

HBO’s  “Confirmation,” the original movie written by Susannah Grant and directed by Rick Famuyiwa, premieres on April 16 at 8 PM ET/PT (Check confirmationhbo.com for reair dates.)  The telepic will detail the explosive 1991 Clarence Thomas Supreme Court nomination hearings, which brought the country to a standstill and forever changed the way we think about sexual harassment, victims’ rights and modern-day race relations. 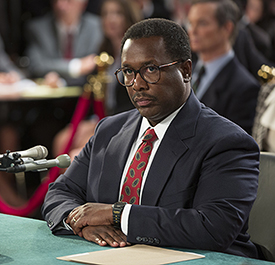 Recently Anita Hill appeared on “Today” interviewed by Guthrie. The Los Angeles Times reported that Hill told Savannah Guthrie: “It’s important for us, I think, to relive the story and continue to learn the lessons from it.”

Hill added, “That’s why the film is important and having a younger audience — 25 years is a long time. An entire generation has grown up and has never really witnessed this event.”

It’s a switch for the professor, now at Brandeis University, who spoke out against Thomas after working for him at the Department of Education and the Equal Employment Opportunity Commission and whose testimony during the confirmation hearings was televised to millions.

“I’m really at peace with my role in history,” Hill said. “I don’t think I have to become at peace with him being on the Supreme Court.”

The bright spot for Hill during the creation of “Confirmation” appears to have been her interactions with Kerry Washington, who not only portrays the attorney and professor, but serves as a producer on film.

Hill met with Washington before filming began, and the actress had many questions about Hill’s mindset during her testimony.

“She just wanted to know not only how I felt but what was I thinking, and that really was encouraging to have someone wanting to know — what was my thinking pattern and what was going on in my mind during this whole episode,” Hill recounted.