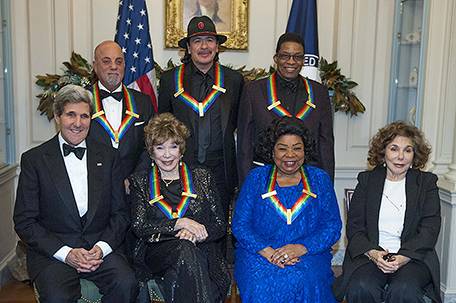 ABOVE PHOTO: Secretary of State John Kerry, with the 2013 Kennedy Center honorees, from left, seated Shirley MacLain, and Martina Arroyo, along with Teresa Heinz Kerry. Standing are Billy Joel, Carlos Santana, and Herbie Hancock, pose for a photo at the State Department for the Kennedy Center Honors gala dinner on Saturday, Dec. 7, 2013 in Washington.

WASHINGTON — The “Piano Man” who became one of the world’s best-selling artists of all time with such hits as “Just the Way You Are,” ‘’Uptown Girl” and “Allentown” was awarded the nation’s highest honor Sunday for influencing American culture through the arts.

Billy Joel joined Carlos Santana, Herbie Hancock, opera star Martina Arroyo and actress Shirley MacLaine in receiving the Kennedy Center Honors. All have been playing music, dancing or singing since they were children — and never stopped.

Tony Bennett opened the tribute to Joel’s long career and his songs written so often about ordinary people.

“Billy Joel is no less than the poet, performer, philosopher of today’s American songbook,” Bennett said.

Don Henley sang “She’s Got a Way” and Garth Brooks sang a medley of “Only the Good Die Young,” ‘’Allentown,” and “Goodnight Saigon,” joined by a choir of Vietnam veterans. Joel has explained he wrote “Saigon” because he wanted to write a song about the soldiers’ experience.

Joel said the honor stands apart from his six Grammys.

“This is different. It’s our nation’s capital,” he told The Associated Press. “This is coming more from my country than just people who come to see me. It’s a little overwhelming.”

The 64-year-old musician born in the Bronx has been playing the piano since he was a boy, growing up on New York’s Long Island. There was always music in the house, he said. His mother sang. His father played the piano.

Impressing girls, though, is what hooked Joel into making a career of music, he said.

President Barack Obama saluted the honorees Sunday night, and top entertainers offered tribute performances for each honoree. The show will be broadcast Dec. 29.

“The diverse group of extraordinary individuals we honor today haven’t just proven themselves to be the best of the best,” Obama said. “Despite all their success, all their fame, they’ve remained true to themselves — and inspired the rest of us to do the same.”

After criticism in recent years that the Kennedy Center Honors had been excluding Latinos, the first song this year was in Spanish. Fher Olvera, the lead singer of the Mexican rock band Mana, led off with a medley of Santana tunes, “Corazon Espinado,” ‘’Black Magic Woman” and “Oye Como Va” for a tribute to the 66-year-old Santana.

An immigrant from Mexico who began learning English from American television, Santana is one of only a few Latinos who have received the honor so far. He first picked up the guitar after hearing blues and rock ‘n’ roll on the radio, and he wanted to be like his mariachi musician father. His family moved to San Francisco. By the age of 22, he was playing at Woodstock.

In a tribute, musician Harry Belafonte joked that something should be done about Mexican immigration because he’d been overshadowed by Santana’s fusion of rock, blues, African and Latino sounds. Santana is perhaps best known for his album “Supernatural” that won nine Grammys.

“Now Carlos is a citizen of the world. He belongs to all of us,” Belafonte said. “Carlos, you haven’t transcended race and origin. Really, who of us has? You continue to be informed by the immigrant experience on the journey to the great American dream.”

Before the show, Santana said he’d never been to the Kennedy Center before but the award stands apart for him because it came during the Obama administration.

“It’s really supreme because the award is being given to me by a black man. If it wasn’t like that, I would say just send it to me,” Santana said. “But since it’s Mr. Barack Obama, I definitely had to make myself present and say from the center of my heart, ‘you are the embodiment of our dreams and aspirations.’”

Hancock, 73, got his start at the piano at age 7 while growing up in Chicago. Soon he was playing Mozart and discovered jazz in high school. He joined the Miles Davis Quintet in 1963 and later set out to create his own sounds, fusing jazz, funk, pop, gospel, soul and the blues. He has won an Oscar and 14 Grammy Awards so far.

Bill O’Reilly of Fox News led the tributes for Hancock.

Hancock stands out as a “remarkable American” and “remarkable artist,” O’Reilly said. Though he said he’s no expert on music, “I just know what I like.”

Jazz greats Terence Blanchard, Wayne Shorter, Jack DeJohnette and others played a tribute for Hancock’s work. And Snoop Dogg took the stage and brought some rap into the mix to celebrate Hancock’s influence on the birth of hip-hop.

“Herbie we love you, baby,” he said. “Thank you for creating hip-hop.”

Supreme Court Justice Sonia Sotomayor led the tributes for a singer she met while a judge in New York City.

“I’m here for the diva,” she said. “Now we justices are fond of using words precisely. Long before diva took on a different meaning, it meant the most celebrated of female opera singers.”

Arroyo found opera while imitating the singers outside an opera workshop when she was growing up in Harlem. Soon she was signing a contract with New York’s Metropolitan Opera and had a breakthrough with “Aida” in 1965. She went on to star in the great opera houses of London, Paris and Vienna.

For MacLaine, her longtime friend Kathy Bates took the stage and praised her work on stage and screen.

“Your humanity informs your work,” she told MacLaine who was seated in a box with the president. “We think you’re magnificent now and forever.”

MacLaine, 79, has been acting for six decades ever since she began ballet at age 3. Her film debut came in 1955’s “The Trouble with Harry,” directed by Alfred Hitchcock, and she won the Oscar for best actress for “Terms of Endearment” in 1983. More recently she’s been playing a role in “Downton Abbey” on PBS.

MacLaine’s younger brother Warren Beatty also has won a Kennedy Center Honor, making them the first brother and sister to both receive the honor.

MacLaine said the award is like a homecoming because she grew up in the Washington area.

“My life as a professional was etched here in the Washington School of Ballet,” she said, but now, “everyone wants to know about ‘Downtown Abbey,’ never mind the last 60 years.”

MJ, Kurt, Whitney needed to get over themselves, says Santana