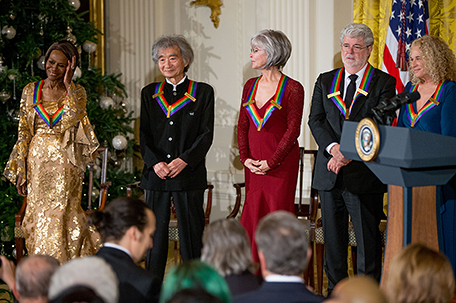 ABOVE PHOTO:  The 2015 Kennedy Center Honors Honorees, from left, actress Cicely Tyson, conductor Seiji Ozawa, actress and singer Rita Moreno, filmmaker George Lucas, and singer-songwriter Carole King stand on stage during a reception for them in the East Room of the White House, Sunday, Dec. 6, 2015, in Washington.  (AP Photo/Andrew Harnik)

George Lucas, Cicely Tyson and Rita Moreno among those honored; to be televised on Dec. 29

WASHINGTON — The technology that George Lucas brought to moviemaking came back to haunt him at the Kennedy Center Honors.

As the tribute to Lucas began at Sunday night’s gala honoring him and four others for contributing to American culture through the arts, the crowd was asked to welcome Carrie Fisher. But the star of the original Star Wars trilogy and the upcoming Star Wars: The Force Awakens didn’t appear in person. Instead, one of Lucas’ beloved creations, the feisty droid R2-D2, rolled onstage and projected her image.

“I wanted to be there to help celebrate your Kennedy Center honor in person, but hey, since you invented video voicemail, I don’t have to be,” Fisher said.

Steven Spielberg and Martin Scorsese, fellow directors who along with Lucas brought new energy to American cinema in the 1970s, offered more conventional tributes to the Star Wars creator, hailing him for his technological wizardry and his commitment to storytelling.

Lucas also created the Indiana Jones franchise, directed by Spielberg, and his special-effects company, Industrial Light & Magic, had a part in seven of the top 10 grossing movies of all time.

The Force Awakens, the seventh movie in the franchise and the first made without Lucas’ involvement as director, producer or writer, opened on Dec. 18 and is expected to be one of the highest-grossing films in history.

As the crowd of Washington power brokers and Hollywood celebrities stood and applauded, Lucas waved from a balcony, wearing the honorees’ signature rainbow-colored garland. Next to him were first lady Michelle Obama and his fellow honorees: singer-songwriter Carole King, actress and singer Rita Moreno, conductor Seiji Ozawa and actress Cicely Tyson.

President Barack Obama was a late arrival to the event after delivering a rare televised address in which he said America would overcome the threat posed by Islamic State militants.

Moreno, a native of Puerto Rico who started dancing at age 9, became the first Latina to win an Academy Award when she was honored for her performance as Anita in West Side Story. She was honored for her diverse and boundary-pushing career, including memorable stints on children’s television.

Moreno is one of a handful of artists to win an Oscar, Emmy, Grammy and Tony. At an earlier White House ceremony for the honorees, Obama said she pushed back against Hollywood typecasting.

“She’s still a leading lady of her era, a trailblazer with courage to break through barriers and forge new paths,” Obama said.

Tributes to Moreno came from her “Jane the Virgin” co-star, Gina Rodriguez, and Rosie Perez, who sang “Fever” with the overzealous Animal of “The Muppets” on drums — a performance Moreno originated, winning an Emmy. They said Moreno paved the way for themselves and other Latino actors.

“She was herself,” Perez said. “She celebrated her heritage but did not stereotype it.”

Tyson, a longtime star of stage and screen, has said the honor validated her decision to turn down many roles as she tried to find meaningful work as a black woman. Her memorable performances include “The Autobiography of Miss Jane Pittman,” which won her an Emmy, and the groundbreaking miniseries “Roots.” She won a lead-actress Tony just two years ago and now, at age 90, she’s starring on Broadway alongside James Earl Jones in “The Gin Game.”

“She turned down more roles than you could imagine because they didn’t lift or serve us as a people,” actor-director Tyler Perry said. “For six decades, she has been diligent in her pursuit to better us all.”

Ozawa, who was born in China to Japanese parents, began conducting as a teenager in Japan after World War II. He went on to lead the Boston Symphony Orchestra for 29 years. Violinist Itzhak Perlman and soprano Renee Fleming paid tribute to him during Sunday’s honors, which also included a performance by past honoree Yo-Yo Ma.

King was inducted into the Songwriters’ Hall of Fame nearly 30 years ago for her broad influence on pop music, which helped shape the sounds of the 1960s and 70s. She has written more than 100 hit singles, including “The Loco-Motion,” ‘’One Fine Day” and “I’m into Something Good.” Her first solo album, “Tapestry,” is one if the highest-selling albums of all time.

Aretha Franklin, wearing a full-length fur coat over her evening gown, closed the show with a performance of a song that she immortalized: “Natural Woman,” leading to a prolonged standing ovation.

This marks the 38th year of the Kennedy Center Honors, and the event had new producers for the first time. Stephen Colbert of CBS’ “The Late Show” hosted the gala for the second consecutive year. It will be broadcast Dec. 29 on CBS.