Ken Osmond, Eddie Haskell on ‘Leave It to Beaver,’ dies at 76 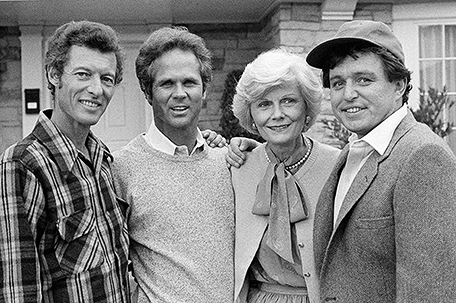 ABOVE PHOTO: Members of the original cast of the “Leave It To Beaver” television series pause during filming of an upcoming TV special, “Still The Beaver,” in Los Angeles on Dec. 10, 1982. From left to right are Ken Osmond, Tony Dow, Babara Billingsley and Jerry Mathers. Osmond died Monday in Los Angeles. He was 76.  (AP Photo/Wally Fong)

LOS ANGELES  — Ken Osmond, who on TV’s “Leave It to Beaver,” played two-faced teenage scoundrel Eddie Haskell, a role so memorable it left him typecast and led to a second career as a police officer, died Monday.

Osmond died in Los Angeles at age 76, his family said. No cause was given.

“He was an incredibly kind and wonderful father,” son Eric Osmond said in a statement. “He had his family gathered around him when he passed. He was loved and will be very missed.”

Ken Osmond’s Eddie Haskell stood out among many memorable characters on the classic family sitcom “Leave it to Beaver,” which ran from 1957 to 1963 on CBS and ABC, but had a decades-long life of reruns and revivals.

Eddie was the best friend of Tony Dow’s Wally Cleaver, big brother to Jerry Mathers’ Beaver Cleaver. He constantly kissed up to adults, flattering and flirting with Wally and Beaver’s mother, and kicked down at his peers, usually in the same scene. He was the closest thing the wholesome show had to a villain, and viewers of all ages loved to hate him.

“He was one of the few guys on the show who really played a character and created it,” Dow added, chuckling as he mimicked the evil laugh Osmond would unleash when his character was launching one nefarious scheme or another and trying to pull Wally and his younger brother Beaver into it.

Mathers said he will greatly miss his friend of 63 years.

“I have always said that he was the best actor on our show because in real life his personality was so opposite of the character that he so brilliantly portrayed,” Mathers said on Twitter.

Osmond returned to making guest appearances on TV shows including “The Munsters” in the late 1960s, but found he was so identified with Eddie Haskell that it was hard to land roles.

He would soon give up acting and become a Los Angeles police officer for more than a decade.

“I was very much typecast. It’s a death sentence,” Osmond told radio host Stu Stoshak in a 2008 interview on “Stu’s Show.” “I’m not complaining because Eddie’s been too good to me, but I found work hard to come by. In 1968, I bought my first house, in ’69 I got married, and we were going to start a family and I needed a job, so I went out and signed up for the LAPD.”

“Ken may have been a famous TV star,” Moore said in a statement, “but his real life role as Los Angeles Police Officer was where he made his biggest impact. After his successful run on one of the most popular shows of all time, he chose to protect and to serve the residents of Los Angeles, and I’m proud to have been able to call him a law enforcement partner.”

Dow, who was a lifelong friend of Osmond’s said “His motorcycle cop stories are terrific.” He recalled his favorite involved Osmond and his partner chasing down and cornering a robbery suspect who turned and shot Osmond in the stomach before his partner wounded the man. Although Osmond’s bulletproof vest absorbed most of the impact, he still had to go to the hospital.

“And he had to ride in the same ambulance with the guy who shot him,” Dow recalled being told.

He would return to TV in 1983, when “Leave It to Beaver” reruns were having a heyday, appearing in the TV movie “Still the Beaver.”

A revival series, “The New Leave It to Beaver,” came next, with Osmond reprising the role of Haskell alongside Dow and Mathers from 1983 to 1989. Osmond’s real-life sons with wife Sandra Purdy, Eric and Christian, played Haskell’s sons, who shared their father’s smarminess on the series.

In 2014 Osmond would co-author a memoir reflecting on his life as Haskell. It was titled, “Eddie: The Life and Times of America’s Preeminent Bad Boy.”