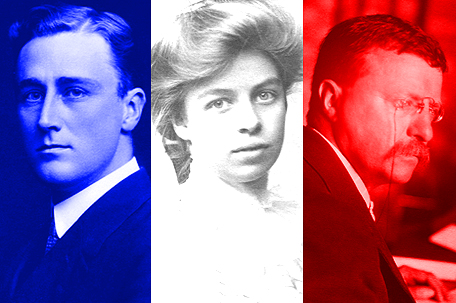 Between Theodore (1901-1909) and Franklin (1933-1945), a Roosevelt was in the White House for 20 years of the 20th Century. It is not surprising, then, that they, in conjunction with FDR’s wife Eleanor, would reshape not only Americans’ relationship with the federal government but even the U.S.’ own standing in the rest of the world.

You probably think of Teddy as the tough-talking President whose foreign policy was reduced to, “Walk softly and carry a big stick!” And his cousin Franklin had his own iconic catchphrase, namely, “The only thing we have to fear is fear itself!”, which was generally credited for buoying the country’s spirits during the Great Depression.

Meanwhile, Eleanor might be best remembered for having publicly resigned from the Daughters of the American Revolution when the organization prevented Marian Anderson from staging a concert at Constitution Hall in Washington, DC because of her skin color.

The First Lady subsequently took it upon herself to invite the snubbed opera singer to perform both at the White House (the first black ever to do so there) and on the steps of the Lincoln Memorial on Easter Sunday in front of  a crowd of 75,000.

What you might not know is that Eleanor Roosevelt was a staunch African-American advocate who insisted that housing, employment and equal education were basic human rights that this society had a moral obligation to provide to all its citizens. Fortunately, Ken Burns 14-hour series, “The Roosevelts,” fully fleshes out Eleanor, FDR and Teddy into the complex human beings they really were, including their triumphs, their transformations, their flaws, and their failings.

For example, we see how Franklin suffered from polio for most of his adult life, and how he went to great lengths to hide from the nation the toll the debilitating affliction was taking on his body. Covering over a century, from Theodore’s birth in 1858 to Eleanor’s death in 1962, this revealing biopic paints a fascinating portrait, not to be missed, of perhaps America’s most influential political dynasty.

To see a trailer for The Roosevelts, visit: https://www.youtube.com/watch?v=tcmGpZppPwA

To order a copy of The Roosevelts on DVD, visit: http://www.amazon.com/exec/obidos/ASIN/B00JKJ0XJU/ref%3dnosim/thslfofire-20

DVD Extras: 13 bonus videos; The Making of The Roosevelts; and deleted scenes with an introduction by Ken Burns.