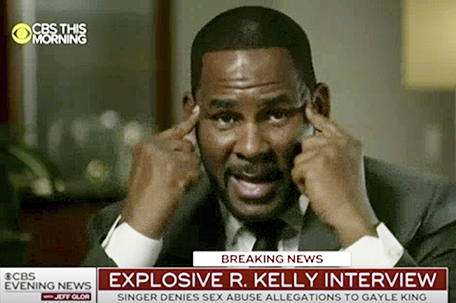 ABOVE PHOTO: In this frame from video provided by CBS, R. Kelly talks during an interview with Gayle King on “CBS This Morning” broadcast Wednesday, March 6, 2019. The R&B singer gave his first interview since being charged last month with sexually abusing four females dating back to 1998, including three underage girls. Kelly has pleaded not guilty to 10 counts of aggravated sexual abuse.  (CBS via AP)

NEW YORK — Gayle King’s composure during an interview with an emotional R. Kelly about the sex abuse charges against the singer likely helped her more than any answers helped him.

King proved unflappable as a crying Kelly leaped up in anger. In the excerpt aired on “CBS This Morning” on Wednesday, she didn’t flinch from challenging the singer as he denied multiple allegations that he sexually abused underage girls and was controlling in his relationships. She drew praise for her performance.

Her best friend Oprah Winfrey urged CBS News to make the full 80-minute conversation with Kelly available. CBS later announced that it will air a prime-time special on Friday based on the interview.

“Gayle King is again teaching a master’s class in interviewing,” Yamiche Alcindor, White House correspondent for PBS’ “NewsHour,” said on Twitter. “She remains so calm and focused while @rkelly loses it.”

Kelly was out on bail following his Feb. 22 arrest in Chicago on charges of sexually abusing three girls and a woman (he was sent back to jail Wednesday afternoon over unpaid child support bills). Legal attention was refocused on Kelly following Lifetime’s documentary special, “Surviving R. Kelly.”

“He had a lot to get off his chest,” King told her colleagues on “CBS This Morning,” admitting surprise that he even agreed to speak publicly. She sat mostly stone-faced across from Kelly as he denied wrongdoing.

“Are you saying that everybody in that documentary was not telling the truth about you? Everybody?” King asked.

After pointing out some details of his alleged abuse, she asked, “why would all of these women tell these different stories about you if they were not true, and they don’t know each other? That defies logic to me.”

When he denied ever having sex with anyone under the age of 17, she said, “it’s so hard to believe that.” She remained seated when Kelly jumped up to complain about his character being destroyed.

“Robert, we have to have a conversation,” she said. “I don’t want you just ranting at the camera.”

King said later that she did not feel physically threatened, although she worried Kelly might knock into her accidentally.

Ronn Torossian, a crisis management expert and CEO of 5W Public Relations, said King did a fantastic job speaking with Kelly in the nearly 10-minute excerpt aired on “CBS This Morning.”

“She was extremely professional in a trying time,” Torossian said. “She kept her composure and came equipped to battle.” The interview “brings the Gayle King brand to another level.”

If that’s the case, King’s timing couldn’t be better.

The 64-year-old journalist spent many years working in local television in Hartford, Connecticut; Kansas City, Baltimore and Washington, D.C., but many knew her from the association with Winfrey. When King helped launch the CBS morning show in 2011, she had less celebrity wattage than her partners at the time, Charlie Rose and Norah O’Donnell.

Rose was since fired over sexual misconduct allegations. O’Donnell remains, with new partners John Dickerson and Bianna Golodryga. King has arguably become the indispensable figure on the morning show, and she’s had a run of newsmaking interviews with presidential contender Howard Schultz, sexual abuse survivor Elizabeth Smart and Virginia Gov. Ralph Northam about his school yearbook photo which showed a person in blackface and another wearing a Ku Klux Klan uniform (he has denied he was either person).

King told Oprah magazine that it was Kelly’s team that reached out to her for the interview.

“I had some reservations because I was thinking ‘What are we gonna get? He’s just going to deny it!’ But I did it because I at least thought there would be some…if not contrition, then at least acknowledgement that ‘This is a bad situation, and I have made some mistakes.’ But instead, he seems to believe everyone is out to get him,” she said.

Some news reports depicted King as unhappy with turmoil at the morning show, where top producer Ryan Kadro recently lost his job amid ratings problems. She’s working on a contract that expires this year, and keeping her is a challenge for new CBS News President Susan Zirinsky. The two women were not made available for comment on Wednesday.

In an interview with the Hollywood Reporter published last week, King was asked whether she sees herself at CBS News this time next year.

“Oooh, that’s a good question,” she said. “All I can say is I really love my job. And I think it’s kind of foolish to predict the future.”