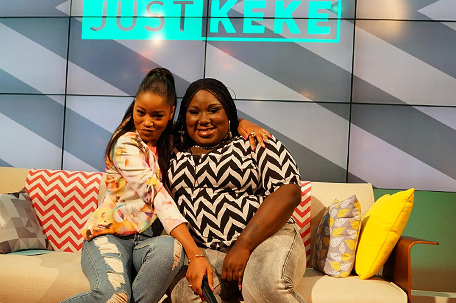 “Everything is going really good,” Palmer, 20, told the “Tom Joyner Morning Show.” “We did better than expected so I’m really happy but really I’m having a lot of fun.”

So far, her guests have included Kevin Hart, Raven, and most significantly, Michael Ealy, her all-time celebrity crush who surprised her with flowers on set on the show’s first day.

Palmer is also part of the cast for the second season of the critically acclaimed Showtime series “Masters of Sex,” based on the pioneering sex research of Williams Masters and Virginia Johnson. “I play Coral, who is a domestic who works for the Masters family as a nanny taking care of their son. My season goes a bit into the Civil Rights Movement but she definitely brings out a different side of Libby, who is Dr. Master’s wife. I think it will be interesting.”

As for her show, Palmer says that it will cover all bases that would appeal to a youthful, BET-age audience. Think of it as an updated “Teen Summit,” the popular issues-driven talk show that aired on BET for years.

“I know one of the main reasons I wanted to do the show not even just for me, but just for the simple fact that I wanted to have conversations that weren’t being had. We can talk about crazy, rachet stuff or talk about things that are completely over the surface, we can talk about things that really matter or that we’re really curious about. Sex, social issues whatever it may be, no one really has a place to really say it or the person that’s saying it doesn’t really get it. This is a place where we can all talk and have a sense of community and not judge one another but actually come to an understanding of things together and at the same time.”

Shamika Sanders of “Hello Beautiful” is sold on the new show and considers Palmer her new ‘girl crush.’  In Sanders’ review of the show, she admits having ‘lackluster feelings for the rising star’ in the beginning, but upon visiting the “Just KeKe” set, she ‘was open to experiencing what the show had to offer and chatting with the youngest host in history first-hand…and  ‘immediately took a liking to the colorful set that looked like my fantasy teen bedroom (when I was 15) with modern twists like zig-zags and zebra prints…“Just KeKe” topics ranged from social network bullying to a young woman who shared her story about being raped on her college campus. KeKe was there to guide the conversations and discuss social injustices that plague today’s youth. She even gave an impromptu tutorial on how to do Sage The Gemini’s red nose dance (which was my favorite part of the show) using one of the audience members…“Just KeKe” is goofy, a bit corny and every bit of what’s missing on TV. It brings the perfect amount of balance of positive, feel good TV to on-air programming that otherwise would be flooded with shows like “Love & Hip Hop Atlanta” and “Real Housewives.”

Rachel Jeantel, a friend of the TJMS, was the show’s first guest.

“People tried to invalidate her message because of who she was was, not only the culture but her generation. The words she used and the way she put her sentences together they tried to invalidate what she said. That hurt me because maybe not on the level she experienced, but definitely in my career I’ve experienced people invalidating the things I have to say because I’m a kid or because the way I say it is different.”

Excerpts from Hello Beautiful contributed to this article.