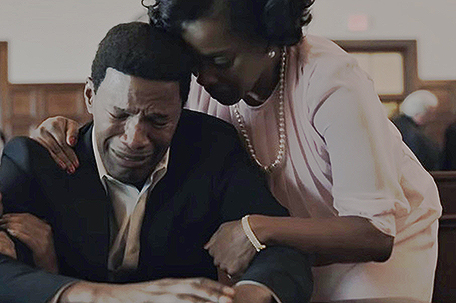 The 28th Annual Philadelphia Film Festival featured a wide array of genres in the 110 features and short films screened. PFF28 opened on Thursday, October 17, 2019 at the Philadelphia Film Center. One of the highlights of the evening was Bryan Stevenson, attorney, social justice activist and author, founder and executive director of the Equal Justice Initiative receiving the Humanitarian Award on behalf of the Philadelphia Film Society. “Just Mercy,” the film based on his best-selling book of the same name, was screened during opening night.  Directed by Destin Daniel Cretton, “Just Mercy” tells the true story of Bryan Stevenson and his fight to exonerate Walter McMillian, a man wrongfully accused of murder. McMillian was held on death row in Alabama for six years before being released. The film stars Michael B. Jordan as Bryan Stevenson, Oscar Award winning actors Jamie Foxx and Brie Lawson as Walter McMillian and Eva Ansley, O’Shea Jackson Jr. as Anthony Ray Hinton, Karan Kendrick as Walter McMillian’s wife Minnie McMillian, Rob Morgan as Herbert Richardson and Tim Blake Nelson as Ralph Myers. Kendrick spoke to The Sun about taking on such a pivotal role.

Minnie McMillian is a character that requires a great deal of depth and heart. Kendrick talked about delving into the complexity of Minnie McMillian, as well as the connection she felt to her.

“Often when I read a character description, I consider all of the attributes of the character as well as the breakdown. I begin to layer those things, connect the dots and combine all the things that I believe would help tell the story.  This time, I had a completely different approach. I wanted to peel away, I wanted to reveal and it’s probably the most vulnerable I’ve allowed myself to be in a role”, Kendrick said.

“This woman, an African American, southern female, has a life we don’t often get a chance to share in this way”, she added. “So, I thought, how can I bring all of me and connect with her experience? There is a part of her experience and a part of my experience as a Black woman from the south that you wouldn’t necessarily see unless I pulled back the curtain. There’s this idea of southern Black womanhood that we’re accustomed to and then there’s another side that you see when you look closer… that’s what I was trying to get to. I thought about her life and experience and her as a person, and I wanted to honor her. I wanted to tell her story in a way that she would be at peace with.”

Kendrick also shared the reverence she held for this character knowing that she was telling the true story of Millie McMillian.

“I think that there is certainly a heightened level of responsibility, knowing that this is someone’s life,” she said. “You always want to work with integrity, but when it’s someone’s actual life story, it makes it that much more important to really focus on caring for this person and this story in a very specific way. Knowing the far-reaching nature of the content that we’re dealing with is even more important, to really allow people to enter whatever their experience is. You have people like Minnie McMillian who is a family member who is affected. They are not incarcerated, but they are still bound by the circumstances of the decisions made by the law makers. So, we all find a way to enter into the story and try to understand this experience.”

The stories of Walter McMillian and Anthony Ray Hinton told in “Just Mercy” are not uncommon. Kendrick shared her thoughts on exposing unfiltered truth in this film.

“I think that Bryan does a beautiful job with examining who we are as human beings on the planet together. I believe that with his work… his book and this film, he introduces us as a nation to ourselves. We start to see all of who we are — not just the joys and the triumphs. Seeing all of who we are, acknowledging it, embrace it and then engaging with one another from that point is important.”

Kendrick also offered her perspective on everyone doing their part to enact change.

“No one can do everything, but everyone can do something… so what is your something?”, she asked. “I think the film forced me to ask and answer that question for myself. From your perspective, what is your something? What can you do? Do you know your prosecutors, do you know your district attorneys, do you serve on a jury, do you have someone in your family that’s incarcerated who was recently released and needs help transitioning? Do you know someone who was wrongfully accused or someone who committed a crime, but they were a victim of mandatory sentencing, so for something very menial their entire life is gone?”, she questioned.

“Just Mercy” is a film that forces us to dissect the flaws of our legal justice system and admit to ourselves the areas where we as a nation fall short.

“It’s easy to walk in ignorance of exactly what’s happening, but once you experience this story you can’t move forward the same way. You can’t not know, and you can’t pretend these things are not happening,” Kendrick emphasized. “While no one can do everything — although Bryan Stevenson is very close to accomplishing that — everyone can do something. Right where you are, ten toes down, right where you stand. I also think we need to celebrate progress. When you think of the timeline for this story, it really wasn’t that long ago. We’ve come a long way, but we still have a long way to go. We are not where we were, or where we are going to be.”

I hope that’s what people take away from the film.”

Stevenson has been doing his part to exonerate innocent death row prisoners, stop the abuse of the mentally ill, and to be a voice for children prosecuted as adults through his work with the Equal Justice Initiative for over 30 years.  To find out more information about how you can support his efforts, visit: www.eji.org. and www.whatisyoursomething.com. Be sure to follow Karan Kendrick on Instagram at: @andthenshelearnedtofly.