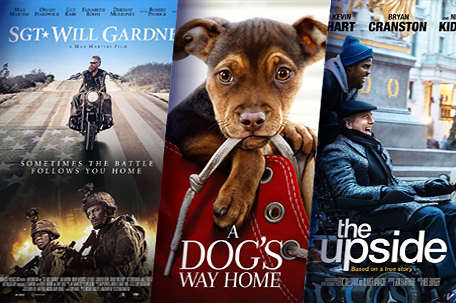 A Dog’s Way Home (PG for peril, mild epithets and mature themes) Adaptation of W. Bruce Cameron’s best seller of the same name about a pet pooch (voiced by Bryce Dallas Howard) that embarks on a very eventful, 400-mile journey after being separated from her owner (Jonah Hauer-King). With Ashley Judd, Edward James Olmos and Alexandra Shipp.

The Upside (PG-13 for drug use and suggestive content) English language remake of “The Intouchables”, the 2011 French dramedy inspired by the real-life relationship of a paralyzed billionaire (Bryan Cranston) and the ex-con (Kevin Hart) he hires as a live-in caregiver. With Nicole Kidman, Julianna Margulies and Aja Naomi King.

Anthem of a Teenage Prophet (Unrated) Coming-of-age drama about the fallout visited upon a clairvoyant teen (Cameron Monaghan) whose premonition about the death of his best friend (Alex MacNicoll) becomes a reality. With Juliette Lewis, Peyton List and Grayson Gabriel.

The Aspern Papers (R for some nudity and sexuality) Adaptation of Henry James’ novella of the same name, set in Venice in 1885, about a young writer’s (Jonathan Rhys-Meyers) attempt to read the collection of romantic letters sent decades earlier by a famous poet (Jon Kortajarena) to his mistress (Vanessa Redgrave). With Joely Richardson, Lois Robbins and Morgane Polanski (Roman’s daughter).

Sgt. Will Gardner (Unrated) Max Martini wrote, directed and stars in this poignant portrait of an Iraq War vet suffering from PTSD and a traumatic brain injury who attempts to pick up the pieces of his broken life during a cross-country motorcycle trip. Featuring Gary Sinise, Omari Hardwick, Dermot Mulroney and Robert Patrick.