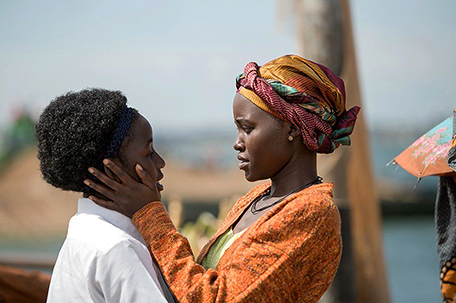 ABOVE PHOTO: Madina Nalwanga and Lupita Nyong’o in Mira Nair’s Queen of Katwe.

Chronic (R for nudity and profanity) Poignant character study starring Tim Roth in the title role as a caregiver for the terminally-ill who apparently needs his patients as much as they need him. Support cast includes Michael Cristofer, Elizabeth Tulloch and Tate Ellington.

Closet Monster (Unrated) Homoerotic drama, set in Newfoundland, about a gay teen (Connor Jessup) who hides his sexual preference from his intolerant, short-tempered father (Aaron Abrams) after witnessing a hate crime, until he falls in love with a handsome co-worker (Aliocha Schneider). With Isabella Rossellini, Joanne Kelly and Jinji Dawson.

Dirty 30 (PG-13 for sexuality, drug use and debauchery) Female empowerment adventure about a couple of jaded women (Grace Helbig and Hannah Hart) who throw a bawdy birthday party to lift the sagging spirits of a lifelong friend turning 30 (Mamrie Hart), only to see the soiree spiral out of control. Featuring Adam Lustick, Anna Akana and Annie Sertich.

The Dressmaker (R for brief profanity and a scene of violence) Kate Winslet handles the title role in this Prodigal Daughter drama, set in 1926, as a fashion designer who falls in love with a local hunk with a heart of gold (Liam Hemsworth) and transforms her hometown upon returning to Australia to care for her ailing, long-estranged mom (Judy Davis). Cast includes Hugo Weaving, Kerry Fox and Sarah Snook.

Generation Startup (Unrated) Millennials are the focus of this documentary revolving around the entrepreneurial efforts of a half-dozen college grads building businesses in Detroit.

The Lovers and the Despot (Unrated) Bamboo Curtain documentary about a successful South Korean director (Shin Sang-ok) who was kidnapped with his wife/actress (Choi Eun-hee) and delivered to dictator Kim Jong-Il to serve as the North Korean dictator’s personal filmmakers. (In Korean, Japanese and English with subtitles) 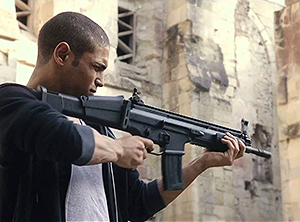 Nassim Si Ahmed in “Made in France.”

Made in France (Unrated) Jihadist thriller about an investigative journalist (Malik Zili) who infiltrates a cell of disaffected Islamic youth planning a terrorist attack on Paris. With Dimitri Storoge, Francois Civil and Nassim Si Ahmed. (In French with subtitles)

Queen of Katwe (PG for an accident scene, mature themes and suggestive material) Madina Malwanga portrays the title character of this uplifting biopic, Phionsa Mutesi, the Ugandan chess prodigy who overcomes poverty and misogyny to become a grandmaster with the help of a volunteer (David Oyelowo) who organizes a chess club in her humble village. With Lupita N’yongo, Martin Kabanza and Taryn Kyaze.

The Ruins of Lifta (Unrated) Middle East documentary about a Palestinian village which was abandoned during the 1948 Arab-Israeli War but never repopulated after the founding of the Jewish State.

Seed: The Untold Story (Unrated) Eco-documentary chronicling the David vs. Goliath effort of indigenous peoples and family farmers to preserve thousands of varieties of seeds being destroyed and/or appropriated by agribusiness and chemical conglomerates. (In English, Spanish and Hindi with subtitles)