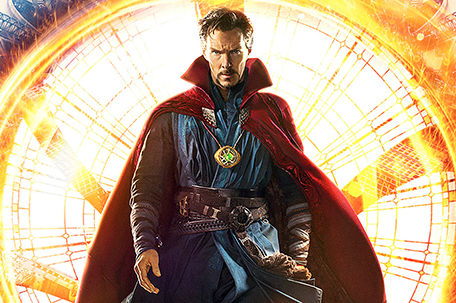 Doctor Strange (PG-13 for action, crashes and pervasive violence) Benedict Cumberbatch plays the Marvel Comics character in this origins tale revolving around a neurosurgeon who morphs into a superhero in the wake of a tragic car accident. Ensemble cast includes Chiwetel Ejiofor, Tilda Swinton, Rachel McAdams and Benjamin Bratt.

Trolls (PG for mild rude humor) Animated musical adventure about the alliance reluctantly forged by an optimist (Anna Kendrick) and a pessimist (Justin Timberlake) to defend their village from a race of ravenous creatures who like to feast on tiny trolls. Voice cast includes Zooey Deschanel, Jeffrey Tambor, Russell Brand and Gwen Stefani.

The Eagle Huntress (G) Coming-of-age biopic chronicling the epic quest of 13 year-old Aisholpan, hailing from a tribe of Mongolian nomads, to become the first female in her family in a dozen generations to earn the esteemed status of Eagle Hunter. (In Kazakh with subtitles)

Ivory: A Crime Story (Unrated) Endangered species expose’ examining the cause and consequences of the worldwide demand for ivory which has left the elephant on the brink of extermination.

My Dead Boyfriend (R for profanity and sexuality) Macabre comedy about a struggling writer (Heather Graham) who only uncovers the truth about her couch potato beau (Rich Graf) after he passes away while sitting in front of the TV. With Griffin Dunne, John Corbett and Gina Gershon.

Peter and the Farm (Unrated) Warts-and-all biopic about Peter Dunning who manages to maintain his 187-acre Vermont farm on his own despite depression, alcoholism and having been abandoned by three wives and four children.