Kaléa Leverette stars as Little Inez in ‘Hairspray on Tour’ 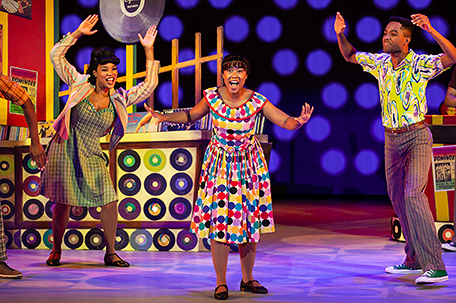 “Hairspray” is celebrating its 20th anniversary this year. Fans of the iconic Broadway show will be delighted to know that it is touring for the first time since 2009. Based on the John Waters 1988 film of the same name, “Hairspray” debuted on Broadway in 2002. The eight-time Tony Award-winning musical, set in the 1960s, tackles topics like weight and racial discrimination. Kaléa Leverette makes her national tour debut as Little Inez in the show. Leverette spoke to the SUN about her journey with the show and the importance of telling this timeless story.

Born in Jacksonville, Florida, Leverette did not initially set out to study theater. She began her performance journey through dance. Although both of her parents were in the military, she studied dance in every city and country her family lived in.

“Every place I went my parents always put me in dance. I started dancing when I was two… I did ballet,” Leverette said.“I actually didn’t really start getting into theater until about high school. I had a really influential theatre teacher at my high school, Dr. Neighbours  — she was wonderful. I’d always loved acting and putting on a show. I’m a bit of a hoot in living rooms, but I never really delved into it further than community theater shows in the areas that we moved in.”

After auditioning and not getting into the performing arts high school of her choice, Leverette shifted gears. She graduated from Florida State with two bachelor’s degrees in biology and International Affairs and received a master’s degree in Public Health from George Washington University. Upon graduating, Leverette was encouraged to pursue beauty pageants, which acted as a conduit for her return to the theater.

“I finished my undergrad in 2016,” she said. “At the time, I was trying to start to raise and save money for medical school. I delved into the world of pageants, and I competed in the Ms. Florida system for two years to earn scholarship money for med school. That’s where I was approached by directors in the local theater scene in Florida to come audition for their shows, because I’ve done musical theater for my talent.”

After auditioning and landing roles in shows like “Elf The Musical” and “Once on This Island,” Leverette was offered the role of Inez in “Hairspray.”

“The pandemic hit right in the middle when they were first building the cast, crew and company for the tour,” she said. “I got an agent and was approached for Hairspray. I sent in a self-tape video to the casting team and after I made the first cut initially, I was allowed to come to a Zoom meeting. We had multiple Zoom auditions and call backs. My first video submission was right before quarantine. That was about a year process for me, but from the time I got my call back, to my first day of rehearsal was only about a two month time window.”

Leverette landed the role of Little Inez in “Hairspray” shortly after making the big move to New York. As a fan of the musical for many years, this role was a dream come true.

“Oh, my goodness, I loved the 2007 rendition of the movie with Nikki Blonsky, John Travolta and Zac Efron,” she said.  “I had the soundtrack, [and] “Good Morning Baltimore” was my ringtone and my alarm tone. All through high school, my best friend and I would watch the movie at least once a week… much to my parent’s dismay. I was super familiar, super excited and I already knew all the characters in the story. Going into the audition, I was already really committed to the show before it started.”

Leverette embraced the role of Little Inez —  a spunky, headstrong character who also happens to be the youngest — with joy and respect for her perspective.

“I enjoy it! I get to look at the world through a child’s eyes as an adult, which is refreshing,” she said. “I know she asked a lot of the questions that we all wish we could ask, especially back in the ’60s when people of color were not permitted to ask questions or even speak unless they were spoken to. She is the catalyst a lot of times in the scenes and would drive the decisions forward, encouraging her older castmates to push more to be more forward thinking than they probably would have otherwise been.”

“Hairspray” has many things — an incredible soundtrack, unforgettable characters, iconic fashion and hairstyles. It also seamlessly uses art to convey a message.

“It was a really eye-opening experience for myself and the other Black identifying cast members,” Leverette said. “For this run of the tour, which they had not done in previous renditions of the tour, they hired a cultural coordinator. They wanted to make sure that both the predominantly white cast members (the council kids) and the predominantly Black record shop kids had a space where they could explore these feelings. For a lot of people who had not been exposed to integration or racism issues before in their personal lives, this was their first experience doing so. That kind of took the burden of teaching them off of us. This is the first show back after George Floyd and the themes affected us a little bit more intensely than they had previously.”

“As an adult being in the show so soon after a really pivotal time in our country, it’s so important to unmute these emotions that are still really raw in a lot of us,” Leverette added. “Police brutality is very present now and was very present in the 60s. To be able to tell the story in a way that people can not only see and understand the historical context, but actually feel empathy towards the people who have been oppressed historically, is so important. Being able to expose younger and wider audiences to that perspective is super important and one of the great messages of the show. I hope the audience takes away the message that we need to celebrate our differences.”

To follow Kaléa Leverette and support her journey be sure to follow her on Instagram @KaleaLeverette and visit her website at: www.kalealeverette.com. Hairspray will be at the Miller Theater (formally the Merriam Theater) on the Kimmel Cultural Campus from May 17 through May 22. Visit: www.kimmelculturalcampus.org for more details on tickets and showtimes.

Dominque Kent stars as Becky in national tour of ‘Waitress’