“JUST AS I AM:A Memoir by Cicely Tyson with Michelle Burford” 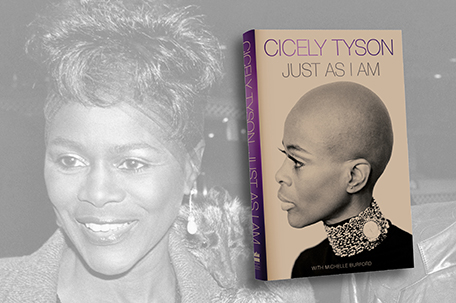 At 96, Cicely Tyson was a dynamic and legendary actor, lecturer, activist and one of the most respected talents in American theater and film history.  A Harlem native and daughter of immigrants who rose out of poverty and onto the global stage, she began her career as a fashion model, gracing the covers of Ebony and Jet, before transitioning to acting in 1955.  Since then Tyson has built an extraordinary career in coveted roles depicting strong Black women outside of caricature or stereotype, and blazed a trail of firsts for them on the big screen and on TV.  The Oscar, Tony, and three-time Emmy Award-winning actor traveled from film and stage to page to bring the world an unprecedented peek into her closely guarded personal life and the grounding forces of family and faith that guide her still.

In JUST AS I AM: A Memoir (HarperCollins; January 26, 2021; $28.99) Tyson tells her stunning story looking back at her life on and off screen.  Written with #1 New York Times bestselling collaborator and Oprah Magazine founding editor, Michelle Burford, this extraordinarily compelling memoir is Tyson’s personal testimony about the nine-plus decades of experiences — some magnificent, others sorrowful, some on screen, many away from the public eye — that have given birth to the woman that she was still becoming at the time of her recent death.

“Just As I Am is my truth,” writes Tyson.  “It is me, plain and unvarnished, with the glitter and garland set aside.  In these pages, I am indeed Cicely, the actress who has been blessed to grace the stage for [more than] six decades.  Yet I am also the church girl who once rarely spoke a word.  I am the teenager who sought solace in the verses of the old hymn for which this book is named.  I am a daughter and mother, a sister, and a friend.  I am an observer of human nature and the dreamer of audacious dreams.  I am a woman who has hurt as immeasurably as I have loved, a child of God divinely guided by His hand.  And here in my ninth decade, I am a woman who, at long last, has something meaningful to say.”

Highlights of “JUST AS I AM” include:

Backstage stories behind Tyson’s most memorable roles including Rebecca in “Sounder,” Jane Pittman in “The Autobiography of Miss Jane Pittman,” Binta in the groundbreaking mini-series “Roots,” Coretta Scott King in “King,” Mother Watts in “The Trip to Bountiful” and Viola Davis’s mother in “How to Get Away With Murder.” For these roles and scores more she reveals how she came to be cast and the ways in which she immersed herself in her characters.  She also describes the unexpected, revelatory and profound life lessons from each role that helped Tyson navigate her personal and professional lives in tandem.

• The nature of her profession has meant abundant time spent in Los Angeles, “but Tyson was and always had been a New Yorker.”  From Hell’s Kitchen where her parents married to the tenements of East Harlem during her childhood and adolescence, and from the Upper West Side neighborhood she and a handful of other Black artists integrated in the 1960s to the environs of theater on and off Broadway, Tyson provides a unique view — and numerous stories — of a city she lived in for almost a century.

• Recollections of some of the leading actors of her day from Marilyn Monroe to Jane Fonda, Eartha Kitt to Elizabeth Taylor.  Tyson also offers details of her beloved friendships with artists such as Diahann Carroll, Roxie Roker, Whoopi Goldberg, Oprah Winfrey, Tyler Perry, Kerry Washington, Shonda Rhimes, Ava DuVernay, Viola Davis and many others.

• Details of what Tyson learned, with the help of genealogists, about her ancestry in the British West Indies where her parents grew up together before emigrating to the U.S. shortly after World War I.  Their marriage was a tempestuous one, and the family ultimately dissolved as a result of her father’s serial philandering, and yet it was the years Tyson spent at her mother’s elbow and on her father’s knee — and the foundation she gained there — that gave birth to who she is.

• How Tyson’s encounters with ignorance and bigotry, during the pre-release national press tour for “Sounder,” the 1972 classic that brought Tyson her first Academy Award nomination, lead to one of the defining moments of her acting career: a silent pact she made with herself to use her profession as a platform — a stage from which to make her voice heard by carefully choosing her projects and portrayals.

• The shocking “me too” moment Tyson experienced in 1956 — a sexual assault at the hands of accomplished acting coach Paul Mann.  She also reveals how her decision not to be deterred by Mann played out as she sought to learn her craft.  Tyson writes, “History has recorded him as a celebrated teacher, one who prepared numerous luminaries for the stage.  Yet in my book, he will forever be regarded as the man who, along my path toward Providence, hurled a brick — one I picked up and threw back at him.”

• Details of Tyson’s tempestuous love affair and eight-year marriage to jazz legend Miles Davis.  With compelling honesty she writes about the good, the bad, the genius and the drugs, the roving eye and the running around.  Above all she writes about the profound pull she felt toward Davis even as his behavior would lead to hurt and humiliation.  For Tyson it was an attraction that ran counter to logic and leaned toward mystery.  “It is possible,” writes Tyson, “to be at once hurt by a man and heartbroken for him.”

• Poignant details of Tyson’s deep, decades-long friendship with renowned ballet dancer Arthur Mitchell (the first African American dancer with the New York City ballet).  She tells the full story of how the two of them, along with fellow actor Brock Peters (of “To Kill a Mockingbird” fame) — in their determination to build on the legacy of slain civil rights leader Dr. Martin Luther King Jr. — joined together a year after King’s assassination to establish The Dance Theater of Harlem.

• How Tyson became linked to a public middle and high school in East Orange, New Jersey with a student body of about 700 primarily underprivileged students, where Tyson often taught a master class in acting and where she continued to be involved in many aspects of the students’ education until her recent death.

Woven throughout her memoir are Tyson’s reflections on race and racism, the black experience in America, and the deep racial traumas that have continued to play out over a centuries-long ugly history of black oppression.  She writes, “We must stare into the face of our past and examine what happened here, on our soil, much of it less than a lifetime ago, a lot of it happening now.  We cannot recover from what we refuse to gaze upon.”

Tyson’s deep and abiding faith in God is similarly woven throughout her story as she looks back on the numerous ways the Lord has directed her life and compels her to continue striving, to continue moving forward.  “I share my testimony in these pages not because I have reached any lasting conclusions,” writes Tyson, “but because I have so much to understand.  I am as inquisitive about life now as I was as a child.  My story will never be finished, nor should it be.  For as long as God grants me breath, I will be living—and writing—my next chapter.”