Juliet Lubwama joins the next generation of brilliant poets 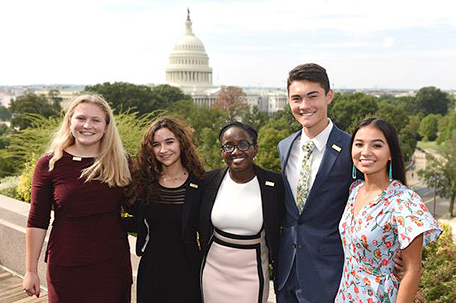 ABOVE PHOTO:  Lubwama with her fellow 2017 National Student Poets

We too often we hear conversations about how today’s youth are obsessed with technology, and how their dependence on social media detaches them from true human connection. Unfortunately, we don’t hear enough about the young people who use their voices to spread positivity.

Lubwama is the winner of five students honored as the National Student Poet of the Year for 2017. The daughter of Ugandan immigrants, Lubwama is using her voice to speak about social issues and identity — issues that affect us all. After returning from the pinning ceremony held at The Library of Congress, for the National Student Poets, the resident of Downingtown was thrilled to share her experience.

Lubwama credits Maya Angelou — whose work she read during fourth grade for the first time — with inspiring her to speak her truth in the form of poetry.

“A lot of my poetry deals with my identity as a Ugandan American and as a Black American,” said Lubwama. “Poetry gives me a way to reconcile both of those identities through the written word. As a national poet, I have the incredible honor of sharing with other people of color who might be grappling with their identities, that they can use poetry as a way of making sense of it all.”

“Growing up, I had friends that were the children of African immigrants like me, and I had friends whose parents were Black Americans,” she continued. “I didn’t really know where I fit in between those two worlds. I was asking myself, “Where do I really belong?” That’s why I turned to poetry, and that’s why I still write poetry. It helps me to continue to make sense of those identities.” 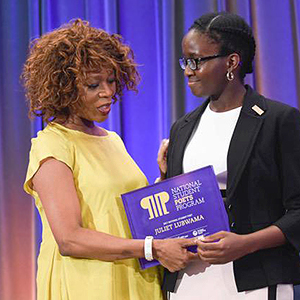 Lubwama entered The Scholastic Arts and Writing Program for the first time this year. She was one of 9,000 students in the 10th and 11th grades, to submit poetry.

“I submitted two poems. One of them was awarded a silver medal, and one of them was awarded a gold medal. On the national level, only about one percent of works get recognized. There were 35 semi-finalists. We were judged and from that list, the five National Student Poets were selected. I am the representative for the North East.,” said Lubwama. She described her pinning ceremony in Washington as, “…Absolutely amazing! I don’t think I could ever have an experience like it again.”

In addition to her experience in Washington, Lubwama and her four fellow National Student Poets will attend a master class in New York with world-renowned poet and playwright, Elizabeth Alexander. She is also working on a community service project where she would like to either start workshops with communities of color and immigrants in Philadelphia, or introduce poetry to pediatric wards in Philadelphia, (specifically Children’s Hospital of Philadelphia) as a method of healing.

Lubwama embraces the tremendous amount of accomplishments she’s achieved thus far with a grace and humility that far surpasses her age.

“My experience so far has been absolutely surreal,” Lubwama said. “It serves as a testament to the fact that my voice means something. I truly hope to use this honor to show other young poets that their voices deserve to be heard. I entirely encourage young poets to enter the Scholastic Awards. It changed my life, and I hope it can do the same for other poets.”

Juliet Lubwama has a long career ahead of her. The amount of talent she possesses, paired with her desire to help others will take her far. To read Lubwama’s work for yourself, visit http://www.artandwriting.org/national-student-poets-program/meet-the-poets/juliet-lubwama/.