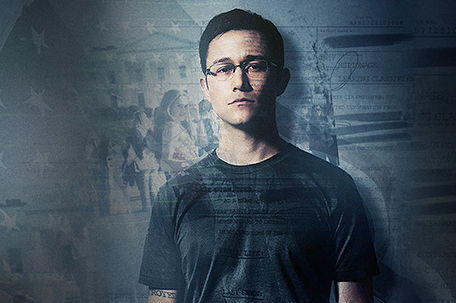 Review by Kam Williams
Joseph Gordon-Levitt Plays Infamous Whistleblower in Reverential, Cloak-and-Dagger Drama
Earlier this year, the film Citizenfour won the Academy Award in the Best Documentary category. But given how the movie made less than $4 million worldwide, one might reasonably conclude that the details of Edward Snowden’s (Joseph Gordon-Levitt) dump of National Security Agency documents remains substantially unknown.

This is ostensibly the thinking of three-time Oscar-winner Oliver Stone (for Platoon and Born on the Fourth of July) in turning the story into a cloak-and-dagger drama about the NSA whistleblower-turned-fugitive’s leak of classified information before going into hiding from the U.S. government. The movie unfolds in June of 2013 in the Hong Kong hotel room where Snowden met with journalists Glenn Greenwald (Zachary Quinto) and Ewen Macaskill (Tom Wilkinson) along with Laura Poitras (Melissa Leo), the eventual director of Citizenfour.

We learn that following four days of interviews, Greenwald published his first story in the British daily newspaper, The Guardian. The Pulitzer Prize-winning series related in stunning detail the extent of NSA surveillance of American citizens in direct contradiction of a recent denial uttered under oath to Congress by James Clapper, the nation’s Director of National Intelligence.

Because the articles identified Snowden as the source of the information, he immediately became the subject of an intense international manhunt. He somehow managed to slip through the dragnet and boarded a commercial airliner bound for Moscow, despite the fact that his passport had been revoked and the U.S. had requested his extradition from Hong Kong.

Upon landing in Russia, Edward was awarded temporary asylum and he has languished there ever since. Lucky for him, this movie has revived interest in his case, inspiring him to recently make a public appeal for clemency.

But a presidential pardon is unlikely to be forthcoming, even though President Obama considered the apprehension of the “29 year old-hacker” a very low priority back in June of ’13. So today, Snowden remains a fugitive from justice charged in absentia with theft, espionage and conversion of government property.

Via a variety of empathetic flashbacks, we are informed by the film that Edward was a high school dropout who suffers from epilepsy. He also enjoys a very loving, enduring relationship with Lindsay Mills (Shailene Woodley), the loyal girlfriend who followed him from Virginia to Hawaii to Moscow. More importantly, the movie establishes Edward as so patriotic he was willing to jeopardize his future to sound the alarm about the surreptitious NSA’s widespread violations of our Constitutional rights.

Congrats to Oliver Stone for crafting a reverential biopic which convincingly repositions a supposed traitor as an altruistic hero of the highest order.