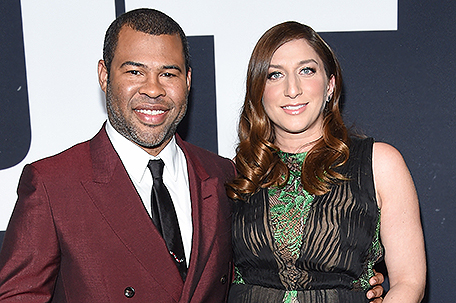 ABOVE PHOTO:  Jordan Peele and Chelsea Peretti arrives for the “Get Out” Los Angeles Premiere on February 10, 2017 in Los Angeles, CA  (DFree / Shutterstock.com)

LOS ANGELES — Jordan Peele is “kind of done” with performing.

“I don’t necessarily love the attention,” Peele said. “It takes a particular kind of toll on you.”

While that might be a dagger in the hearts of fans who came to know and love Peele as an uncannily calm Barack Obama, the endlessly annoying Meegan or any of the other characters he played in the sketch comedy series “Key & Peele,” the good news is that he’s still in the business of entertaining. He’s just taking a seat behind the camera. The better news? He’s really good at it.

His directorial debut, “Get Out,” in theaters Friday, is one of those rare creations that functions both as a taut psychological thriller and as searing social commentary about racism in the modern era. The premise is simple: A Black man, Chris, (Daniel Kaluuya) goes upstate with his White girlfriend, Rose, (Allison Williams) to meet her parents (Bradley Whitford and Catherine Keener) and things get weird. It’s been described as “The Stepford Wives” meets “Guess Who’s Coming to Dinner.”

Peele, who also wrote the film, isn’t necessarily commenting on interracial relationships directly. His mother is White, as is his wife, comedian Chelsea Peretti – although he met her after it was written. Instead, it’s in part based on the experience of being the only Black man at an event full of mostly older, white people.

“There’s a desire to connect that is sweet and endearing, but I wanted with this movie to show how you experience it different from our perspective,” Peele said. “It’s one thing to have one conversation with somebody but when every conversation you’re having begins to resemble that conversation you begin to realize that you are being seen as other… it’s at least a reminder that we’re not past race.”

Like “Scream,” ‘’Get Out “ is a satire with “full thriller vocabulary.”

Peele was unabashed in referencing his influences during filming – often telling his production designer that he wanted one thing to feel very David Lynch and another to have more of a David Cronenberg vibe. He described it as pooling his influences and melting them down to create something new.

“(Quentin) Tarantino is the guy who taught me with the most clarity that you don’t have to be afraid of your influences in order to create something absolutely new,” Peele said. “I mean, what is more unique than ‘Pulp Fiction’ and what is also simultaneously more derivative? I think that’s something very freeing for artists to realize. There’s no way to escape that which formed you as an artist.”

Peele is a lifetime fan of horror films and thrillers and on one level wanted to make something for the underserved Black audience – but not exclusively so.

“The Black horror movie audience is a very loyal fan base,” Peele said. “We come out and we enjoy horror movies and there’s this extreme lack of representation of Black characters, Black protagonists, but also the values that you see demonstrated in a theater – people yelling at the screen, ‘Get out! Get out of the house!’”

That’s part of the reason Peele created the character of Chris’s friend (played by comedian Lil Rel Howery), who serves as the voice of reason and caution. He’s warns his friend not to go and demands he leave when things seem off.

“There’s an element to being African-American where you are perceptive to things that somebody else may not be,” Peele said. “That, to me, became a cool special power and kind of helped justify what would make a horror movie with Black people in it unique.”

But it was also important to Peele that “Get Out” wasn’t “just a Black movie.”

“It had to be an inclusive film. If it doesn’t work for everybody then, it’s not worth it There’s this mix of the movie itself being about the fact that there’s never been a movie like this,” he said. “Part of what’s special about this movie is that it is about representation. It’s about giving someone like me a chance and a platform to make a movie from my perspective and trust that an audience will come and see it.”

The same theory applied to casting his lead actor, Kaluuya, a name likely unfamiliar to most audiences. You might recognize him – he was in the TV show “Skins,” and in films like “Sicario” and “Kick-Ass 2” – but he hasn’t had the chance to stand out on his own yet. Peele realized early on that there wasn’t a large pool of 26-year-old African-American leading men to drawn from.

“When I was putting this movie together, the Black actors who are this age that would have been considered stars of films were Michael B. Jordan, maybe Chadwick Boseman and … you got any more?” Peele said. “We very quickly realized that the only answer here is somebody who is a star but who we haven’t seen get to be a star yet.”

But Peele is optimistic. He sees a renaissance happening in Hollywood where people are finally being given chances, apparent in the rise of talents like Donald Glover and the worldwide success of films like “Straight Outta Compton.”

“That’s why it’s cool to be in the industry right now,” he said. “You see the emergence of people who should have been in the picture the whole time.”