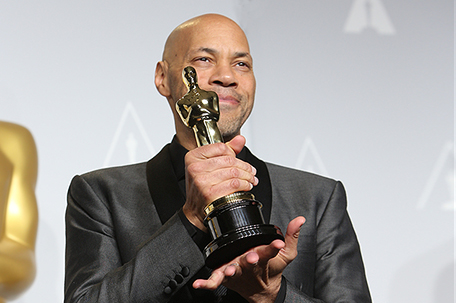 So are they feuding, or are they not?

On Oscar night, the web was all abuzz over what was perceived to be a mutual snub involving 12 Years A Slave director Steve McQueen and screenwriter John Ridley.

In short, if you missed it all, as John Ridley strode down the aisle to accept his Oscar, despite stopping to shake hands with, and/or hug others along the way, he walked right past McQueen, who was seated in an aisle seat, without so much as a glance, let alone a handshake. And McQueen didn’t even attempt to engage Ridley in any way.

Furthermore, Ridley didn’t thank McQueen onstage when he accepted his Best Adapted Screenplay Oscar, and then McQueen seemingly returned the *snub* when he spoke on behalf of the producers of the film, after it was awarded the Best Picture Academy Award, and thanked several who worked on the film, but didn’t mention Ridley at all.

So, naturally, the rumors of a potential feud between the two began to simmer

Nikke Finke (formerly of Deadline) even shared via Twitter that she’d spoken to “sources” of hers who claimed that there was some dispute between the two over the film’s screenwriting credit. Finke didn’t elaborate, but the speculation that continued suggested a couple of possibilities: first, that Ridley initially adapted the screenplay on spec, with no pay, with promises of a future payday, but either hadn’t received the money he felt he should have for the work he did, or the money he was paid wasn’t as much as he expected; And the other strand centered on McQueen, wanting to have been credited as co-writer on the project, given his supposed contribution to the screenplay, was peeved that Ridley got all the credit.

Neither really made much sense to me. First of all, if the alleged dispute was over salary, Ridley’s alleged beef would really have been with the producers of the film, as in Brad Pitt and his Plan B production company, and not with McQueen, who also received a producer credit on the film, but was chiefly its director, and ultimately (at least I don’t think so) wouldn’t have any influence on what Ridley got paid. And secondly, if the alleged dispute was over who should’ve been credited for writing the script, I would think that this would’ve been in the news a while ago, and not first become public at the Oscars. Somebody would’ve leaked the story, I’m sure. Or either gentlemen would’ve mentioned something. It seemed silly to me that they’d let something like this simmer for many months, and eventually let it boil over on live TV, on the night of the Academy Awards.

And thankfully, finally, one of them is talking.

According to Ridley, speaking to the New York Post from inside the Vanity Fair Oscar Party after the ceremony, there’s absolutely no feud between he and McQueen. His words:

“Listen, without Steve McQueen I wouldn’t have this Oscar tonight. I owe a lot to the genius of Steve McQueen, and I am forever grateful to have had the chance to work with him. I had less than two minutes to thank everybody, and I was so caught up in the emotion of the moment when I was onstage. It was Steve’s wife who found Solomon Northup’s book. It was a great honor, but also a challenge because I wanted to be true to him, to turn Solomon’s eloquent words into a screenplay.”

Of course, that’s Ridley’s story, and he’s sticking to it. McQueen may or may not say the same thing whenever he’s asked about it – and I’m sure someone will eventually ask him about it.

But for right now, there’s nothing to see here. I suppose maybe the fact that it was a relatively smooth night, without any real hiccups nor drama (save for John Travolta’s gaff mispronouncing Idina Menzel’s name), as host Ellen DeGeneres kept things moving along briskly, audiences may have been looking for something – anything – seemingly controversial.