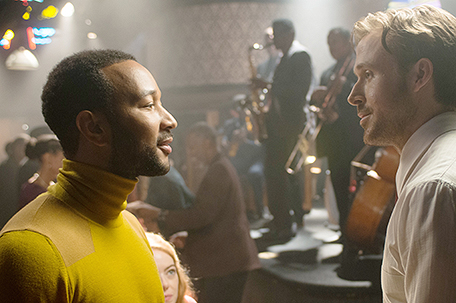 Ohio-born John Legend is an award-winning, platinum-selling singer/songwriter. His work has garnered him ten Grammy Awards, an Oscar and a Golden Globe, among others. A graduate of the University of Pennsylvania, where he studied English and African-American literature, John participated in a wide range of musical activities while in college.

During that period, he was introduced to Lauryn Hill, who hired him to play piano on her track “Everything Is Everything.” Shortly thereafter, he began to play shows around the Philadelphia area, eventually expanding his audience base to New York, Boston, Atlanta and Washington, D.C.

After college, he was introduced to an up-and-coming hip-hop artist named Kanye West. West quickly signed John to his G.O.O.D. Music imprint and had him sing vocal hooks on some of his tunes.

Legend’s career started gaining momentum through a series of similar collaborations with established artists. He added vocals to an impressive list of chart-topping hits including Kanye’s “All of the Lights,” Jay-Z’s “Encore” and backup vocals on Alicia Keys’ 2003 song, “You Don’t Know My Name.”

Legends debut album, Get Lifted, was released to critical acclaim in December of 2004 by Columbia Records. The album landed multiple Grammys, including Best R&B Album, Best New Artist and Best Male R&B Vocal Performance. Earlier this year, John won his first Academy Award for “Glory,” a song he wrote and performed with Common for the film Selma.

Throughout his career, Legend has worked to make a difference in the lives of others. In 2007, he launched the “Show Me Campaign” (ShowMeCampaign.org), an initiative that focuses on education as a key to breaking the cycle of poverty.

He’s received the 2010 BET Humanitarian of the Year Award, the 2009 CARE Humanitarian Award for Global Change, the 2009 Bishop John T. Walker Distinguished Humanitarian Service Award from Africare, and the 2011 Harvard Foundation Artist of the Year Award. Furthermore, Legend sits on the boards of The Education Equality Project, Teach for America, Stand for Children and the Harlem Village Academies.

Here, he shares his thoughts about playing his first, major movie role opposite Ryan Gosling and Emma Stone in La La Land, a picture which he also produced. And he talks about his philanthropic work and his new album, “Darkness and Light,” too.

Kam Williams: Hi John. Thanks so much for the time.

KW: I’ve tried to land an interview with you for years, so I’m honored to finally have this opportunity to speak with you.

KW: Let me start by asking what made you decide to do this film with Damien [writer/director Damien Chazelle]?

JL: Well, it really started with meeting him as a filmmaker in my capacity as a producer, because my company, Get Lifted Film Company, has done a few movies and a couple of television shows now. We love meeting with up-and-coming directors who are doing great things. And, obviously, upon the success of Whiplash, Damien was someone we’d love to collaborate with. My producing partner [Mike Jackson] suggested we connect with him very early on, after we saw a screener of Whiplash. We finally got a chance to sit down and discuss something creative when he was in the process of preparing to shoot La La Land. The script was finished, and they were already in talks with Ryan and Emma to star in it. Damien wanted to see if we were interested in getting involved. He was originally thinking in terms of executive producing and in terms of the music for the character, Keith, and his band, The Messengers. But eventually, he asked me if I wanted to play Keith. I said, “Yeah, let’s do it!” I hadn’t done anything like it before. I hadn’t had a major speaking role in a film before. But I guess he felt that I could pull it off, because the character had some similarities to my own background as a musician. Damien thought I could relate to the character, and I felt the same way. So, it made sense for me to do it, since I was already a fan of his work. And then, when I found out that Ryan and Emma had come aboard, it seemed like a no-brainer for us to get involved. 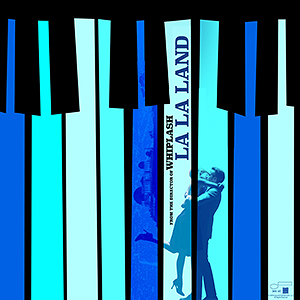 KW: After watching the film, I was surprised to see that you have so few acting credits, because you did a phenomenal job.

JL: Thank you! I’d spent my whole career focused on music. Acting wasn’t something I was really pursuing, even though we were doing film and TV behind the camera as producers, because music takes up so much of my creative energy. But I couldn’t pass up the opportunity to work with such great people.

KW: After Damien released his first movie, Guy and Madeline on a Park Bench, I wrote: “Appreciate Damien Chazelle now and avoid the rush!”

JL: Yeah, he’s brilliant! You can tell, just by virtue of the fact that he made Whiplash and La La Land before turning 32. That’s not even fair. [Chuckles]

KW: What did you think of Justin Hurwitz’s score for La La Land? Did he compose the songs you played in the movie?

JL: We wrote those together. He, Marius [de Vries], Angelique [Cinelu] and I. The four of us just sat in a room and played, and figured it out. Justin, obviously, was the composer for the rest of the film, and he’s wonderful. But since I always feel comfortable singing, that particular song [“Start a Fire”] worked, and made sense for the character I was playing. Yet, it posed an interesting challenge, because you wanted the song to be good and represent a viable creative path, but you also wanted it to be a song Ryan’s character, Sebastian, wouldn’t want to play, given the storyline. So, it called for an interesting balance of making it a good, jazz-influenced tune you could hear on the radio while also making it something that represented too much of a departure for Sebastian.

KW: Early in your career, were you a musical purist like Sebastian, who had a reverence for the classics?

JL: No, I never looked at myself as a purist in the sense of simply wanting to recreate old music that I’d grown up listening to. I never struggled with that conundrum. But I think every artist is influenced by certain traditions and the artists they grew up listening to. For Taylor Swift, it was country music. For me, it was gospel and soul. Other artists grew up listening to folk, classic rock or whatever else it was for them. But no matter what your early influences are, you have to decide how much you’re just recreating the feelings those artists gave you, recreating their styles, or doing something fresh and new that’s influenced by them. I think we all deal with that. There’s always the push and pull in our careers of how much we go traditional and how much we try to change it up and do something new.

KW: Editor/Legist Patricia Turnier says: like many people, I think that you are a great artist and I consider you like the young Stevie Wonder. I saw you in Montreal when you opened for Alicia Keys on one of her tours. Given that your new film is about jazz, please name a few of your favorite jazz musicians.

JL: Honestly, I don’t consider myself much of a jazz aficionado. When I was growing up, my dad used to play a lot of vocalists like Billie Holiday, Ella [Fitzgerald], Sarah Vaughan, Nancy Wilson and Nat King Cole. So, I grew up loving some of the great standards singers and jazz vocalists. Also Nina Simone who cut across a few different genres. Those are a few of my bigger influences, but i wouldn’t say I was much of a jazz expert.

KW: Patricia also notes that you consider yourself a feminist. She would like to know why men should feel as concerned as women about female issues and how men can advance women’s causes?

JL: First of all, because its the right thing to do. It’s fair, you have women in your family, women you work with, and women who are your friends. Why shouldn’t they have the same possibilities and opportunities as you? Why shouldn’t they live in a world where they are valued for what they contribute, and valued as much as men are for the same thing? Who wouldn’t want to live in that world? It doesn’t hurt men for women to do well, because it just makes the planet a better place. There’s more innovation, more creativity and more productivity in the world. All of our lives are improved when women have power, influence and opportunity.

KW: I’d like to congratulate you on your new album, “Darkness and Light,” which I’ve been listening to. It’s terrific!

JL: Thank you. I’m really proud of it. It’s funny being in La La Land mode today, since I’ve been in “Darkness and Light” mode for the past month, and I’ll be back into it for the next year or so. It’s exciting to support this really beautiful film and to have a new album out at the same time.

KW: I’ve always been impressed by your incredible commitment to charity work. What has inspired you to do that?

JL: I’ve always thought that if I were successful in this career, I would have a lot of resources and a lot of influence, and that I would would want to use them to make the world a better place. Part of my making the world better involves creating great art, and part involves my being an activist and contributing directly to causes that improve people’s lives with my time, my money and my influence. I think that’s part of who I am and of who I always will be.

KW: Congratulations on the Best Song Oscar for “Glory” last year. And it looks like you’ll be back in contention, since it looks like La La Land’s going to be nominated for a lot of Academy Awards.

JL: Well, I don’t know whether I’ll personally be nominated, but I’m going to be rooting for the whole team. We have some wonderful contenders in a wide range of categories.

KW: Well, thanks again, John, and best of luck with both La La Land and Darkness and Light.

JL: Thank you very much, Kam.

To see a trailer for La La Land, visit: https://www.youtube.com/watch?v=0pdqf4P9MB8

To order a copy of John’s new CD, Darkness and Light, visit: https://www.amazon.com/exec/obidos/ASIN/B01MTUIYY8/ref%3dnosim/thslfofire-20

Chrissy Teigen talks about was her fiance John Legend