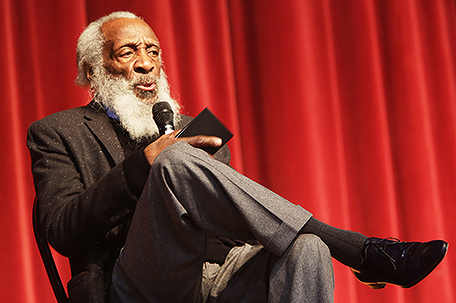 In a career that has spanned nearly 60 years, comedian, political activist and social critic Dick Gregory has had many lives. He started out in the 1950’s as a comedian and MC and eventually toplining at the Playboy Club in Chicago. He was soon discovered by TV talent scouts, and became a regular fixture on TV talk shows throughout the 60’s. Long before Chris Rock or Richard Pryor, Gregory’s humor was searing and cutting edge, dealing with topics such as racism and other social ills, but with his own patented barbed wit.

However, producers treated him, as well as other black performers on the shows at the time, as hired help, and would not let him sit down with the various talk show hosts on whose shows he appeared, until he began to turn down gigs and was finally allowed to sit with the host and talk, just like the white guests. But that’s one of many instances of Gregory fighting against what was unfair and unequal treatment against black people.

During the same period, he became a committed civil rights and political activist, even going on several hunger strikes (as late as 2010), and in 1968 he actually ran for President of the United States, with a campaign in which he said that his first act if elected would be (and I still remember it) to “paint the White House black.”

Later on during the 1980’s, he became a fanatical health food and weight loss advocate (remember Gregory’s Bahamian Diet mix for which he introduced a new and improved version last year). 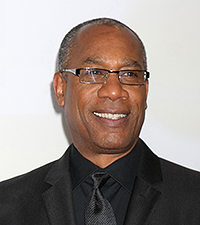 But today Gregory is better known as a conspiracy buff, to put in mildly. Since the mid 70’s, Gregory has been known to advocate what many people believe are some of the wackiest and most unbelievable conspiracy theories, making outrageous statements, like when he stated in 2014 that the United States is “the most dishonest, ungodly, unspiritual nation that ever existed in the history of the planet,” adding, “As we talk now, America is 5 percent of the world’s population and consumes 96 percent of the world’s hard drugs” (though one has to reluctantly admit that many of the things that Gregory says and believes do have some kernel of truth in them).

So it’s not surprising that, finally, a documentary on the life, career and work of Gregory, entitled “Dick Gregory; How to Survive in America,” which will be directed by Andre Gaines (“Brazilian Western”) and produced by Michele Farinola, is in the works, scheduled to be completed in 2017.

But while we wait for that film, it was announced today John Legend is producing an Off-Broadway production titled “Turn Me Loose,” a comedy-drama written by Gretchen Law about the life of Gregory.

Joe Morton (“Scandal”) is attached to star as the now 83-year-old. 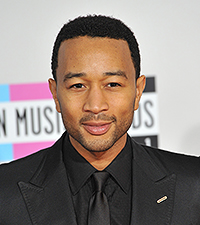 “People like Dick Gregory, Paul Robeson, Harry Belafonte and Nina Simone show me what the definition of an artist is – it isn’t just to make art but to speak truth to what’s happening, speak beauty into the world, speak love into the world and also get involved,” John Legend said in a statement.

The play has had three workshops and readings, at Atlantic Theater Company, New York Stage and Film and New York Theater Workshop.

The production will be directed by John Gould Rubin; it is scheduled to begin performances May 3 and to open May 19 at the Westside Theater.