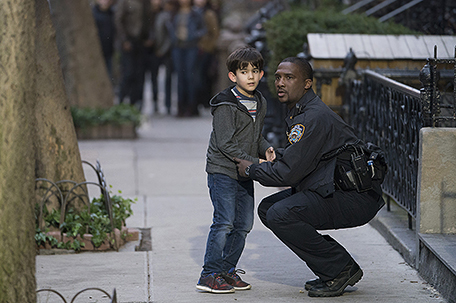 ABOVE PHOTO: Jerod Haynes and the cast of NBC’s “The Village”

“It was a class. I was learning about life everyday… not just in front of the camera, but off camera,” Haynes said. “It really was a community, [and] it really was family not just on screen, but off screen as well. Lorraine Touissant was the nurturer, Frankie Faison was giving me life lessons every day, Dominic Chianese helped me out, Moran, Michaela,Warren… Darren is like my brother. It really was like a family environment. We talked about life issues, what we had all been through and it was sort of a mirror to what we were filming. I feel like I’m part of a family and I couldn’t ask for anything more.”

The residents of “The Village” are: nurse and single mom named Sarah (McManus); her strong-willed teenage daughter, Katie, (Van Dien); Gabe (Kagasoff), a young law student; his rambunctious yet hilarious and much older father, Enzo (Chianese); Ben (Haynes), a police officer with a heart of gold; Ava (Atias), an immigrant fighting for the security and future of her American-born son; Nick (Christie), a veteran, struggling to cope with life after returning from war; and finally the glue of “The Village”, patriarch Ron (Faison) and the matriarch Patricia (Toussaint). Haynes shared his enthusiasm about working with such a tremendously diverse and talented cast.

The wide array of stories told through the lens of a phenomenal cast of actors, adds a layer of depth to “The Village” that will undoubtedly captivate audiences. Immediately after being introduced to the multifaceted characters, the audience is greeted by their endearing qualities. Haynes shared his experience playing Ben.

“When I first heard about this show, I thought it was needed,” he said. “I said, ‘wow, they’re making a show like this… that’s awesome, and the timing is perfect!’ I felt blessed to even get the opportunity to help tell these stories effectively.”. Ben definitely wears his heart on his sleeve, and he wants to figure out how he can make circumstances better. He wants to be the best he can be. He doesn’t want to shake up too much craziness, because there’s enough craziness going on. You’ve got to imagine as a cop, he seen enough as it is, but I think he does have empathy… which explains a lot. I also think his past and things he’s been through, can affect some of his decision-making… but he wants family, he wants love, he wants to be loved and he’s fighting for it. I felt like I would give this character my all, and I didn’t mind being vulnerable for something like this.”

As a Chicago native, Haynes is very familiar with the often negative narrative of the interactions between law enforcement and Black and brown communities. After co-writing and directing “Blueprint”a film that tackles the difficult subject matter of police brutality — Haynes shared his experience playing a police officer in our nation’s current political climate.

“I was talking to one of our social media folks, and I struggled early with posting a picture of me in uniform,” he said. “It wasn’t because I didn’t like the role, it was just that me knowing what it represents… I needed a minute”, I know imagery is real and I know our relationship as a people with law enforcement. I have friends that are in law enforcement, and there is a responsibility to change the narrative. The difference is that law enforcement is mandated to protect and serve. I think that’s what Ben is doing with his life and I think he doesn’t separate the job from his life. To show that there are actually folks in blue that look like me… it can change the narrative in a positive way. For the people that I know that are in law enforcement that go through it daily; I felt it was my duty to represent them in the best way possible.”

“The Village” also offers audiences tangible examples of how certain members of our communities are ostracized. Issues like immigration take center stage on “The Village”, but with the shift in focus being the importance of humanity.

“First of all, I just want to applaud Mike Daniels and everybody involved for having the courage to speak on these issues because they are sensitive ones,” Haynes said.

“It’s important to be apart of telling those stories. To really understand that there are people that can tell another person, you don’t belong here and we will just expedite your trip out of here. Meaning we dislike you so much, that we’ll take you away from your family… that’s tough!”

“I was talking to my partner Moran Atias, and how she would get herself together right before these takes,the places where she would go on her mind,” he added. “I was just sitting there watching her while we were playing this scene, and I couldn’t help but to be affected by it. To see a mother and a son separated on screen and there’s nothing she can do… that’s rough. Now Ben has to look after this 7 or 8 year old and try to help his mother, and he too felt helpless. Hopefully, what we’re showing here creates some empathy, and hopefully it gets us back to community because right now we’re so divided and isolated.”

Overall, “The Village” offers a wide scope of the human experience, and what it means to go the extra mile for the people in your community. Haynes offered his hopes for the viewers.

“We’re all wounded in some sense; in order to heal those wounds, we need to come together,” he said. “That’s what The Village is in some sense… a hospital. It’s where the wounded go to get healing. Hopefully we can say to the world, it’s ok to know your neighbor, and you should… you might learn something.”

To follow and support Jerod Haynes on his journey, follow him on Instagram at: @jerodjhaynes and on Twitter at: @MrJerodHaynes. “The Village” premieres on NBC on Tuesday, March 19th 10/9c; visit https://www.nbc.com/the-village  for more details.