Jeffery Robinson creates a masterpiece with “Who We Are: A Chronicle of Racism in America” 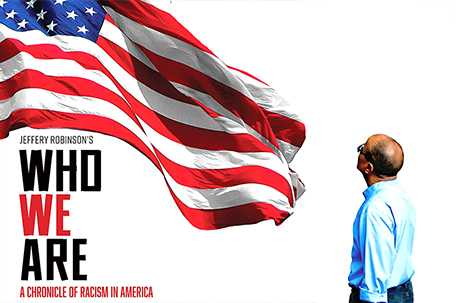 Racism in America is a topic that sparks much controversy.

Some insist that we are now living in a post-racial society, while Black and Brown people have no choice but to be acutely aware of the dangers that racism presents to our daily lives, in every facet of our existence.

Jeffery Robinson, former deputy legal director of the ACLU and an Attorney of Counsel, addresses and dismantles many of the false narratives surrounding the state of racism and White supremacy in his brilliant documentary, “Who We Are: A Chronicle of Racism in America.” Robinson spoke with the SUN about what inspired him to tell this story and what he hopes people will gain from embracing the good, bad and ugly of American history.

He did not originally intend to do this project, but was propelled to do so after experiencing personal tragedy.

“Sometimes things happen when they’re not even your major target. I was trying to deal with death in my family,” Robinson said. “My sister-in-law and my grandmother died, and they were raising my sister-in-law’s son. So, our nephew became our son, and moved from New York to Seattle. I’m trying to figure out how to raise a young Black man — my wife and I didn’t have any kids, and he’s 13. I’m freaking out about all of those things and I start reading looking for help.“

“What I find is all these articles about things in our history that I had never heard of before,” he continued. “It was like ‘wait a minute, this can’t be true,’ and one thing led to another. It got to the point where it was overwhelming. My training as a defense attorney always said when you have a complicated set of facts, put them onto a timeline and see what happens. When I did that, the top of my head came off. I saw an unbroken line from 1619 to today of government policies and procedures at the state, federal, local and on a personal level throughout America, where anti-Black racism was the major construct that was at work.”

Robinson put the information he found into a presentation, which eventually developed into this documentary film. That development was the result of a happenstance meeting with Sarah Kunstler, who was in the audience during the presentation. Sarah went on to co-direct the film with her sister, Emily Kunstler.

The “Who We Are Project” seamlessly combines a number of elements, including footage from that presentation, archived footage of the brutal crimes against humanity that Black people have endured, as well as interviews with a variety of subjects. In one of those interviews, Robinson spoke with a man proudly waving a Confederate flag during a visit to South Carolina. That interview serves as a prime example of the cognitive dissonance associated with people in America that choose to attach themselves to false narratives in American history and conflate those ideologies with a sense of Southern pride.

“When I ended the interview saying I’m feeling a little sick — I actually was sick that day,” Robinson recalled. “We had been in South Carolina for three days. We had been to the Slave Mart Museum, looking at shackles designed for 3-year-olds. We had been to a plantation, where you could see on their charts how many enslaved people were going to die from moccasin bites, dysentery and everything else. We had been to Mother Emanuel Church, where Dylan Roof slaughtered all those people. The trip had been incredibly emotional, but Sarah and Emily called me and said, ‘this guy is down here, and he’s talking.’ I think he expected me to yell at him, because that’s how those conversations go down there, but I was determined not to yell at him.”

“What he didn’t know is that I’m a trained defense lawyer,” Robinson continued. “I understand that yelling at someone that you don’t agree with is not necessarily the best way to show how ignorant they are. My goal was to expose what he was hiding behind. In order to do that, I needed him to say what he said. I’m simply saying to him these are the facts we’ve agreed on, and it just doesn’t add up to what you’re saying. That’s when he goes to say,‘Well, we treated slaves like family.’ So, I asked, ‘Could I own you under the same circumstances?’ and he wasn’t willing to go there.”

As the great-granddaughter of Edward and Sarah Ragin, two of the original plaintiffs in Briggs v. Elliot, which later became one of the five cases of Brown v. Board of Education, I grew up hearing the stories of the torment and sacrifice my family and so many others experienced during their fight for change. That being said, after doing what I consider to be my due diligence to learn as much as possible about the history of this country, there is still so much that I don’t know. Robinson expressed his desire to share some of the information about our history that has been deliberately hidden.

“I think that goes to show how effective and how widespread the attempt to erase this from our history has been —  they were brilliant,” he said. “They re-wrote history. Many people over the last five years only know about the Tulsa Massacre because there was an HBO show called “Watchmen.” People are like airplanes  — did that really happen? I think it’s a good thing that it brought this into people’s consciousness. When you see this film, you understand there were 4,000 people that were not accounted for at the end of this. [At] the World Trade Center, there were 3,000 people that died there [on 9-11], and we’re never going to forget that.

“People ask, ‘Why is it important to know our history?’ You could go to Tulsa, Oklahoma today, look at the Greenwood neighborhood, and you will see that it’s not affluent,” Robinson said. “You will see maybe one Black-owned building, The Vernon AME Church. If you knew nothing about the Tulsa Massacre, you could conclude that the Black community here hasn’t done very well  — maybe they didn’t work very hard, maybe it wasn’t important to them, and you might believe that narrative. But if you knew the millions of dollars of property and goods that were destroyed —  we’re talking 8 to 10 million dollars in unpaid insurance claims. If you knew the wealth that was destroyed, and the practices of the community going forward. If you understood that when they started finding mass graves just a year and a half ago. … they exhumed some of them, and then the mayor said, ‘We’re stopping,’ and they closed them all, because they don’t want to know. If you know all of this and look at Greenwood today, you come up with a radically different answer. That’s the importance of this history.”

The genocide that took place in Tulsa is part of a vicious cycle that has been repeated throughout history. Every time Black people accumulate wealth and build self-sustaining communities, they are brutally murdered, and those communities are intentionally destroyed. Seneca Village, now known as Central Park, is just another example of this. To add insult to injury, many are attempting to erase the sordid history of these atrocities all together with attempts to ban Critical Race Theory — which they conflate with the teaching of Black history in general — throughout our country.

“This isn’t [simply] Black history — it’s American history,” Robinson said. “It has been stolen from all of us, and it’s on all of us to reckon with it. The current things that you see have been repeated in the past, and when you talk about this Black wealth equals white backlash and destruction, part of what’s in the film is the story of Elmore Bolling, a man that was lynched in Alabama in 1947.”

Bolling was killed for being a Black man that was considered too wealthy in his community.

Lynching is still happening today in many forms.  In Colin Kaepernick’s case, the NFL attempted to silence him and his career was terminated as punishment for having the audacity to use his voice to promote change. This is the work that the “Who We Are Project” continues to do… educate.

“One of the things about the “Who We Are Project” moving forward is [that] we’re focused on education,” Robinson said. “In states with anti CRT laws, we have a strategy for those youth. States that don’t have those laws, we have a different strategy. We have a strategy for community, as well as corporate organizations, because getting this information into people’s heads will make a difference.”

The “Who We Are Project” connects the dots and bridges the gap between who America is and who we claim to be. Much like people, we are a nation that is multifaceted with aspects of greatness and shame. The only way to remedy our past and present shame is to address it head on.

“Who We Are: A Chronicle of Racism in America” is currently in theaters and is a must see! Check your local listings for showtimes. In the interim, visit: www.thewhoweareproject.org to stay up to date with this incredible body of work and the work Robinson will continue to do moving forward.

Review: ‘Who We Are’ offers a searing view of racism in US