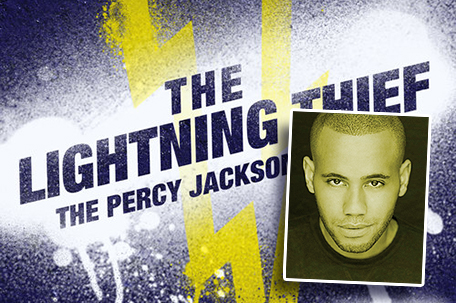 Epic tales of the Greek gods are familiar to many of us. Stories about Zeus and his mighty lightning bolts and Poseidon’s complete control of the sea take our imaginations on a non-stop adventure.

In 2017, this story was adapted into a musical called “The Lightning Thief: The Percy Jackson Musical.” Based on the best-selling American fantasy novel of the same name, “The Lightning Thief” tells the story of Percy Jackson, son of Poseidon. After discovering he is a demigod with powers he has yet to learn how to control, Percy embarks on a journey to find Zeus’s missing lightning bolts to prevent a war between the gods.

During its international touring debut, “The Lightning Thief” will make a stop in Philadelphia. James Hayden Rodriguez who stars as Luke, a Camp Half-Blood counselor, sat down with the SUN to speak about his role in the show.

On a quest of this magnitude, Percy needs as much help as he can possibly get. Rodriguez, who joined the cast in March 2017, spoke about playing the role of Luke and the importance of his relationship with Percy.

“When Percy gets to Camp Half-Blood, Luke is his camp counselor,” he said. “He becomes Percy’s confidant. He becomes Percy’s best friend and role model. Luke is kind of showing Percy the ropes of Camp Half-Blood. Luke shows him how to use his powers and basically shows him how things work. He’s also the leader [of] the Hermes Cabin, which is the cabin of misfits for people who don’t know who their godly parent is. Luke is kind of the champion for everyone that feels like they don’t fit in. He tried to set an example and exude this confidence that everyone can look up to.”

As one might imagine, a show about Greek gods and a quest to prevent a war in the heavens requires a great deal of preparation on behalf of the actors. This show is action-packed from start to finish and requires its actors to learn complicated and very detailed choreography. Rodriguez spoke about the challenges of the fight choreography specifically.

“This is definitely the hardest show that I’ve ever done because there’s so much fighting,” he said. “We’re playing in a different universe with this show, so it’s a lot of sword fighting, fighting with staffs, fighting with baseball bats, shields and all kinds of things. When Percy gets to Camp Half-Blood, a huge battle ensues for fun. They’re playing capture the flag, but they’re also demigods going at each other’s throats.” He added, “So it becomes this crazy game, where all these kids are trying to kill each other for the sake of capturing each other’s flags.”

In addition to the complex movement in the show, there are a number of show-stopping musical numbers. Rodriguez shared his favorite number to perform.

“My favorite song to perform is “D.O.A.” (dead on arrival),” he said. “When Percy enters the underworld, he meets Chiron. Chiron is the ferryman of the underworld, but in our show she’s also an aspiring rock musician. This big production happens where we’re all dancing, singing and playing these crazy characters. In the song, Chiron belts these amazing notes. With the lights and the sound… you actually feel like you’re in a rock concert. It’s so much fun to be a part of.”

In addition to the incredible visuals and sound in “The Lightning Thief”, the show has a much bigger takeaway.

“Our show is a lot of fun, of course,” Rodriguez said. “It revolves around Greek mythology, gods, monsters, this huge quest that these kids go on… but there’s a strong heartbeat to this show that really centers around physical and emotional strength. Percy’s mom sings a song to him called “Strong” where she explains to him that it’s the things that make him different that make him strong. All of these insecurities he has, from being dyslexic and having ADHD, are actually things that are going to help him. He has to learn to look at those things positively. So that’s a huge message that people of all ages are going to walk away feeling. It’s so universal and I think people will walk away feeling empowered.”

You can continue to follow James Hayden Rodriguez’s journey on Instagram @james_haydn. “The Lightning Thief: The Percy Jackson Musical” will premiere at the Merriam Theater, January 22-27. Visit www.kimmelcenter.org for more details on tickets and showtimes.