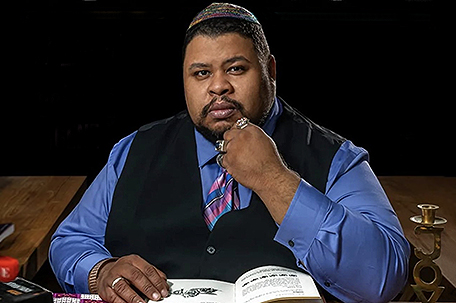 Michael Twitty, a Black and Jewish chef, culinary historian and writer has been teaching the masses about the food that we eat and its history for quite some time. Twitty’s passion for our connection to food through tradition, culture and its global  impact earned him a James Beard award for his book “The Cooking Gene.”

He now continues to share the wealth of knowledge he’s acquired from years of research with his newest book, “Koshersoul.” Twitty will be sharing in detail the inspiration behind “Koshersoul” and the 50 plus recipes within during a book signing and conversation with Joan Nathan at the Weitzman National Museum of American Jewish History in Philadelphia on September 22 at 7:00 p.m. Twitty spoke with the SUN about his culinary journey and the knowledge he hopes to continue to share about African American foodways.

Twitty’s love for food and the kitchen began early.

Although his passion for food was always present, Twitty’s path to becoming the multihyphenate and respected voice in the culinary world was anything but conventional.

“I told my parents when I was six years old, [that] I wanted to be a writer, a teacher, a chef and a preacher, and that kind of actually happened,” he said. “I don’t have the traditional food trajectory. A lot of people get started in the kitchen or restaurant and they work their way up, they have a business plan or restaurant. People always ask me, ‘do you have a restaurant?’ No, I don’t have a restaurant — not everybody in food has a restaurant, and not everybody who writes about food is a food critic. There are so many other opportunities in the food world.”

Twitty began studying culinary history at a young age. His mother, father, grandparents and uncles instilled the values and knowledge that Black people were part of history and the present and are capable of doing anything. Those ideas ignited a passion that led him to his path.

“There were a lot of trivia books back in the 80s,” Twitty said. “I was really fascinated with who ate the first raisin and who did what. The thing that got me was this piece on Thomas Jefferson. It was this picture of Thomas Jefferson made to look as tall, handsome and effortless as possible. It was a picture of him in an apron with a silver, belled [and] domed tray. I looked at this picture and was confused. I said ‘he did what now?’ I went to my grandmother and said, ‘look at this picture’ and my grandmother said something that amounts to ‘ain’t no way in hell… that was Black folks doing that work.’ That was the first time for me at 7 or 8 years old that I realized there was a whole other story to tell. I started seeing these old pictures of Black people from the antebellum and post antebellum period cooking or in kitchens, and said ‘we were there, too.’ I really wanted to tell those stories.”

After visiting multiple countries in Africa, Twitty was able to see and feel firsthand the connection to our culture. He has taken this knowledge and shares it as a method to reconnect those that are part of the African diaspora with our traditions, recipes and connections to our ancestry that were lost or stolen.

“I think that there’s a difference between going to Europe and going to Africa,” Twitty said. “ [In]Europe, you might understand a few things a little bit better, but Africa… it’s like you start to miss the part of yourself that you did not know that you were missing. The undergirding behavior, thought and spirit around you is really what makes you Black. Some people have the idea that Black is just a phenotype, and it is not. It’s definitely our history [and] culture — it’s the circumstances we’ve found ourselves in. The minute you step foot in West Africa, you start to understand the parts of yourself that you were never taught to respect in America. There’s a certain vibe and a certain way, and then you look around and it’s, like, ‘ oh, that’s where that comes from.’ We may not always have the language or the timeline to communicate that this is who we are.”

In addition to sharing information on African and African American foodways, Twitty also strongly advocates for there to be more representation of Black people in all aspects of the culinary world.

“We need to be advocates for more than one version of us,” he said. “There’s probably 10 or so really prominent Black culinary historians of Black foodways. Each one of those perspectives is marketed differently than what you saw in “High on the Hog.” My point is that Giada De Laurentiis, Bobby Flay, Lidia Bastianich and Stanley Tucci and about 10 other people have Italian cooking shows, but we only have one hit Black show. By the way, if you try to market these other shows, they don’t say ‘ok, let’s do our own.’ What they do is they go, ‘we’ve already got one.’ We have to militate against that and let people know, there are so many Black food stories and Black food cultures that are not documented.”

In addition to our undocumented history, Twitty helps connect the dots between the intersectionality between African American and American Jewish culture in great detail in his latest book, “Koshersoul.”

“There are a lot of American Jews and African Americans make up a large part of the American culinary scene, so there’s a lot of family, kinfolk and mishpocha that you can draw on,” he said. “I realize that for some people in our community, there is this idea that that’s over there not in American life, but marginalized people have always found their way to each other. We’ve also become very deep part of each other’s worlds. That’s the part of the story that “Koshersoul” tells,” Twitty said.

“Jews of African descent — which number about 150,000 people, give or take, in America — have had sort of an extraordinarily out of proportion role to the creativity we’ve brought to the scene, they brought to the world and food is part of that,” he said. “People need to stop seeing Judaism as a faith and Judaism more as the religious culture of the Jewish people. “Koshersoul” allows me to talk about the food part of it and the fact that African Americans and American Jews have shaped a lot of food culture in America from beginning to end. Old Bay is a result of that cultural collaboration. I’m influenced by the food of the entire Jewish diaspora, that goes beyond Eastern Europe and Europe.”

To find out more information and to purchase tickets for the September 22 event, visit: www.theweitzman.org/events/koshersoul. Also be sure to visit Michael Twitty’s blog at: www.afroculinaria.com and follow him on IG @thecookinggene and @KosherSoul on Twitter.